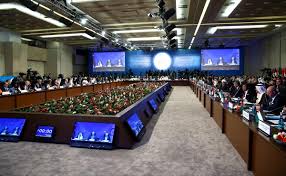 Morocco has warned against attempts to fuel separatist trends and redraw the map of the Islamic world as some parties are trying to take advantage of a fragile situation where the Islamic world is both a source and a target of sectarian division, fanaticism and terrorism.

The warning was made by King Mohammed VI in the speech that was read out on his behalf before the 13th Summit of the Organization of the Islamic cooperation (OIC) held in Istanbul.

“…Some parties, here and there, are trying to take advantage of a fragile situation…in order to fuel separatist trends and redraw the map of the Islamic world, on a basis which ignores historical and identity-related facts, denies specificities and inherent characteristics and unveils premeditated designs to meddle in the future of nations, jeopardizing world security and stability,’ said the King in his speech.

The King who deplored that “sectarian division, fanaticism and terrorism are gaining more ground,” stressed the need to identify the causes of “this abnormal, high-risk situation and to determine the reasons why the Islamic world is affected by it, both as a source and a target.”

However, he pointed out, “the current situation is not an inevitable fatality for the Islamic Ummah, which has always been the cradle of lofty spiritual values and the champion of enlightenment and moderation, and whose valuable contribution to building human civilization is largely attested by history.”

After he recalled the principles of coexistence, interfaith tolerance and respect for minorities enshrined in Islamic communities, where different ethnic groups have managed to blend and merge into a civilizational identity based on pluralism and diversity, the king deplored “the spread within western communities of Islamophobia, along with fear, suspicion and hatred towards Muslim minorities, during the last decades.”

These minorities, he said, are mainly made up of migrants from Muslim countries, who are part of western communities committed to human rights, as well as positive interaction, tolerance and solidarity.
To counter the anti-Islam rhetoric which is gaining ground in the West, stirring up feelings of hatred and rallying public opinions against Islam, and to overcome this challenging phase, the Moroccan King stressed the need to identify and conduct a critical analysis of the causes behind the current situation, as well as an objective assessment of historical responsibilities, at the local, regional and international levels.

‘This can be achieved by designing and implementing appropriate strategies and reform programs, which take into consideration national specificities, while drawing on both regional and international solidarity and cooperation,” King Mohammed VI said.