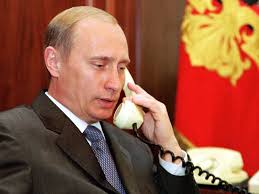 Just a couple of weeks before the UN Secretary General submits his annual report on the Sahara to the UN Security Council, King Mohammed VI had on Tuesday an extensive phone talk with Russian President Vladimir Putin that covered among other topics the latest developments in the Sahara issue.

King Mohammed VI and the Russian President voiced “strong concern over the latest developments of the Sahara issue at the level of the United Nations Secretariat,” said a statement issued by the Royal office.

“The latest developments” refer to the controversial remarks and missteps of the UN Secretary General Ban Ki-moon during his visit to Algeria early March when he had used the word “occupation” while talking about Morocco’s presence in the Sahara.

Vladimir Putin and King Mohammed VI- who had met at the Kremlin mid-March during the Moroccan King’s official visit to Russia- “agreed to strengthen their coordination and carry on contacts on this issue in order to reach, by the end of April, a balanced and fruitful result,” the Royal Office said in the statement released Tuesday afternoon.

According to the statement, the two leaders hailed the progress made in enacting the Moroccan-Russian Strategic Partnership and the commitment of both countries’ officials to ensure the full implementation of the economic, cultural, political and security dimensions of this partnership.

The two heads of State also praised the quality of the political dialogue between their countries and discussed various regional and international issues, especially the situation in the Maghreb and in the Middle East.

During the King’s visit to Moscow, Putin had voiced Russia’s support to Morocco in the Sahara issue, affirming opposition to any “infringement of the parameters” already defined by the Security Council. Meanwhile, his Foreign Minister Sergei Lavrov had called for a negotiated settlement accepted by all parties to the Sahara conflict.

Besides Moscow, Paris, one of Morocco’s traditional allies, also renewed its opposition to any trespassing of the framework outlined by the Security Council. The Sahara issue “is the subject of a UN mediation, which France supports within the parameters set by the Security Council,” Spokesman for the French Foreign Ministry, Romain Nadal had said on March 9.

“For France, the autonomy plan presented by Morocco in 2007 is a serious and credible basis” for a negotiated solution to the Sahara issue, said the spokesman.

And last Sunday, French Prime Minister Manuel Valls reaffirmed from Algiers that France’s standpoint on this issue is “unchanged” and that “any solution must be found within the framework of the United Nations.”

In the same vein, Secretary of State John Kerry had reaffirmed, in a phone call to King Mohammed VI on March 23, that the United States’ policy supporting a formula of autonomy under Moroccan sovereignty for the Sahara remains unchanged, and assured the King that the US will continue to work with Morocco to resolve this longstanding regional dispute.

Kerry’s phone call came just few days after State Department Spokesperson John Kirby issued a statement reiterating that the US considers Morocco’s autonomy plan “serious, realistic and credible,” and “a potential approach that could satisfy the aspirations of the people in the Western Sahara to run their own affairs in peace and dignity.”

Russia, France and the United states, all permanent members of the UN Security Council, could weigh in the balance during the coming negotiations within the Security Council, where a meeting is scheduled for April 26 with the countries contributing troops to MINURSO. The following day, the Security Council will hold consultations on the matter before it adopts, on April 28 as scheduled, a resolution on the Sahara extending the MINURSO mandate.

According to analysts, the immediate concern for the Council at this time is to determine how best to manage the crisis surrounding MINURSO in a manner that allows the mission to continue to operate as mandated.

Anyways, Morocco had repeatedly made it clear that it rejects any change or modification of the nature of the United Nations’ role in the handling of the Sahara issue, any change to the MINURSO’s role and any plots seeking to shelve the autonomy plan.