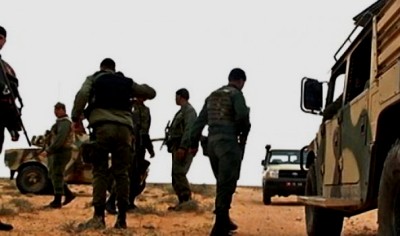 The men had earlier attempted to join war-torn Libya from Ras Jedir crossing point with no passports but were prevented from doing so.

Tunisia was hit last year by three terrorist attacks all carried out by Tunisian citizens who were reportedly trained in IS training camps in Libya.

Many Tunisians were among the 40 terrorists killed in a US air raid on February 19 in the Libyan town of Sabratha. They were reportedly planning fresh attacks in their own country.

Tunisian authorities have stepped out security control of its lengthy border with Libya in a move to curb the flow of terrorists cross the border.

In a separate report, the US State Department on Friday cautioned American citizens against traveling to Tunisia’s South and West regions near the Libyan border and mountainous regions, deemed too dangerous due to the presence of terrorist organizations on top of which IS group.

The State department urged Americans to be on the alert at public places such as hotels, commercial centers, touristic sites, restaurants as possibility of abduction at these places may be high.