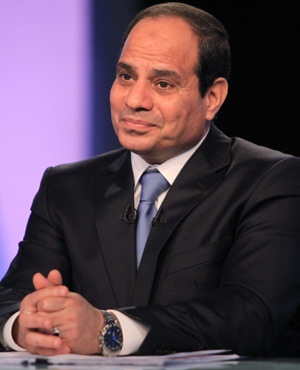 US Republicans Sunday stunned the world as they threw support behind Egyptian strongman al-Sisi calling him “the right man at the right time” to lead Egypt even as the latter is lambasted by right groups and the Obama Administration for the gloomy human rights situation in Egypt.

A group of US Republicans led by war-thirsty senator Lindsey Graham cheered President al-Sisi for his determination to wipe out IS, which is posing a big threat to “the democratization and economy recovery process” taking place in a post-2011 Egypt.

For Senator Graham, who was in Cairo, al-Sisi is the right man at the right time for Egypt at this juncture.

Graham took an opposite stance on al-Sisi’s human rights record deemed alarming by the Obama Administration and human rights groups around the world who have laid into the Egyptian president defining him as a human rights butcher.

For Gharam, al-Sisi was faced with the difficult task of striking a balance between security and rule of law.

“I understand that the country is a new democracy and coming out of chaos,” told reporters in Cairo.

“He (Sisi) has to balance security with the rule of law… there are elements that come to Egypt to disrupt the nation and there are many people coming here to help you. Don’t treat them all in the same way,” Gharam said.

Sisi’s regime is deemed worse than that of ousted Hosni Mubarak. Since toppling the only democratically elected Egyptian President Mohamed Morsi in 2013, al-Sisi has ruled Egypt with iron-hand, cracking down on supporters of the Islamist President. Hundreds have been killed and thousands, including Morsi himself, have been put in jail following trials deemed unfair.

Sisi’s regime has also been accused of forced disappearances of human right activists and silencing of outspoken journalists blacklisted by the regime. The latest report of Reporters without borders revealed that Egypt, under Sisi, is Africa’s largest prison for journalist and second behind China.

In the wake of the military coup against Morsi, the Obama Administration froze the US annual $1.3 billion of military aid to Egypt but would later release the funds in a move to help the regime overcome the ascending threat of IS in the Sinai and other cities including capital Cairo.