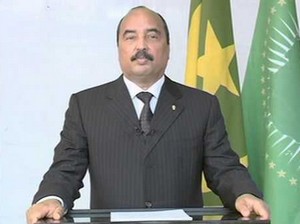 Mauritania: Government Canvasses for President’s Stay in Power after 2019

Tensions raised high in Mauritania Wednesday as the Government went public calling for constitutional change to allow the current President to stand for elections in 2019, in contrast to current constitution which limits power to two terms in a row.

On Tuesday, the Government’s spokesman Mohamed Lemine Ould Cheikh said at a press conference that a third term in office for President Ould Abdel Aziz, whose tenure ends in 2019, represents the call by the majority and by the Mauritanian people.

“Some ministers or the majority of Mauritanians or the entire Mauritanian people believe that the President deserves a third, or fourth, or fifth mandate,” he said.

“The will of nations and of people surpasses the constitution, meaning that the people are the source,” he specified.

Ould Cheikh was echoed by his colleagues Ould Daddah and Mokthar Ould Diay respectively Ministers of Justice and of Finance who also stated before lawmakers the Government’s desire to see President Abdel Aziz staying in power after his ongoing term.

Their comments stirred condemnations and heated debates in the parliament house. Opposition lawmakers and senators walked out in protest after Justice Minister reportedly failed to apologize for his comments deemed “anti-constitutional.”

The Mauritanian President had promised in January before diplomats accredited to Nouakchott that he would not run for elections at the end his current term.

The opposition has been very wary about the regime’s genuine willingness for a dialogue. Efforts by the regime for talks have failed as both traded accusations for the failure. The opposition maintains pressure on the regime so that it renounces changing the constitution to allow the president to seek a new mandate.