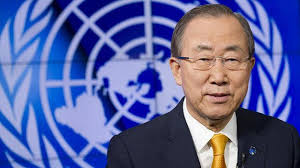 In an attempt to defuse the tension that recently flared up between the United Nations Secretary General Ban Ki-Moon and Morocco, the UN Chief on Monday expressed explicit regrets for the misunderstanding about the word “occupation” he had used when referring to Morocco’s presence in the Sahara.

Stephane Dujarric, Ban Ki-Moon’s spokesman, Monday said during the daily briefing that Ban Ki-Moon’s use of “occupation was not deliberate but was the expression of his personal feelings in face of the dire living conditions of the Sahrawis in the Tindouf camps.

The spokesman said that the UN Chief used the word “occupation” in one single time in response to a press question, noting that “he had been moved and saddened to see the harsh conditions in which men, women, and children have been living in for decades.”

“His use of the word was not planned nor was it deliberate. It was a spontaneous, personal reaction,” Stephane Dujarric said.

The UN Secretary General regrets “the misunderstandings and consequences that this personal expression of solicitude provoked,” and “nothing he said or did in the course of that trip was meant to offend or express hostility towards the Kingdom of Morocco, which is a valued member of the United Nations,” the spokesman said.

He recalled that the main purpose of the Secretary‑General’s trip in North Africa early March “was to focus on the need for a mutually acceptable way forward that would, among other things, end the tribulations of the refugees.”

Dujarric also pointed out that Ban Ki-Moon has always maintained an impartial position on the Sahara issue. “He has not and will not take sides on the issue of Western Sahara.”

He added that the UN stance on the issue has not changed and that the world body’s facilitation of the negotiating process is based on the principles of the United Nations and the relevant Security Council resolutions. “We seek to encourage the parties to negotiate without precondition and in good faith to find a mutually acceptable political solution.”

“As mediators in the talks between the different sides in the conflict, we remain faithful to UN principles and the Security Council’s resolutions,” Ban Ki-Moon said according to Dujarric.

In a document distributed Monday afternoon to the press accredited to the UN, Stephane Dujarric, reiterated that Ban Ki-moon regretted the misunderstanding around the term “occupation” he used during his trip in Tindouf on March 5.

He explained again in what circumstances he used this word and that it was “neither premeditated nor intentional.” “This was a spontaneous personal reaction,” the UN document states, adding that the UN position has not changed and that “the UN Secretary General has at no time of his trip to North Africa suggested or indicated a change in the UN’s approach to the conflict over the Western Sahara.”

The wording of the document as well as the spokesman’s statement show there is desire on the part of the UN Chief to appease the tension he triggered by his undiplomatic remarks.

Moroccan authorities and people had firmly responded to Ban’s remarks. Over three million Moroccans took to the streets to protest these comments and the Government adopted a set of measures including the removal of dozens of civilian and political personnel of the UN peacekeeping mission in Western Sahara, known as MINURSO.

Several world powers, including France, the United States, Russia and the Gulf Cooperation Council reiterated support to Rabat’s stand in this longstanding regional dispute and to the Morocco-proposed autonomy plan for the Sahara deemed as “serious, realistic and credible.”

The UN Chief’s remarks had prompted the State Department to issue a statement reiterating that the US considers Morocco’s autonomy plan “serious, realistic and credible,” and “a potential approach that could satisfy the aspirations of the people in the Western Sahara to run their own affairs in peace and dignity.”