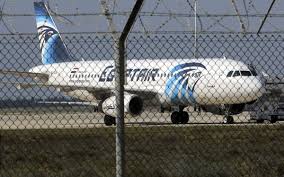 The Egyptian plane hijacked Tuesday and diverted to Cyprus raises serious concerns over the country’s airports security, according to some experts.

This new incident comes few months after Russian Metrojet Flight, taking off from Egypt’s Sharm el-Sheikh airport, was downed in the Sinai Peninsula, killing all 224 people on board. ISIS terror organization claimed responsibility.

Since then, Egypt said it beefed up security at airports across the country, affirming that its airports are safe but the new plane hijacking proves the contrary.

According to press reports, an Egyptian man hijacked an EgyptAir flight, forcing the plane to land in Larnaca airport, on the south coast of Cyprus.

The hijacker has been identified as Egyptian national Seif El Din Mustafa, an Egyptian-American dual citizen.

The Egyptian Airbus 320, which was flying from Alexandria to Cairo, was transporting at least 81 people on board. Many of the passengers had been so far released but three passengers and four crew members remain on board.

A statement from the Egyptian Civil Aviation Ministry said there were 26 foreign passengers including eight Americans, four Britons, four Dutch citizens, two Belgians, two Greeks, a French national, an Italian, and a Syrian. Three other foreigners were not identified.

The hijacker claimed to be wearing a suicide explosive belt. It appears that the hijacking is not related to terrorism, but rather to personal issues and to the hijacker’s ex-wife settled in Cyprus.

It was unclear whether the hijacker had taken explosives on board or whether he was bluffing. The Larnaca airport, where the Egyptian plane landed, has been closed and flights diverted to elsewhere.