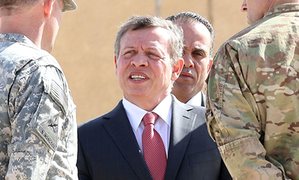 Some details of the talks between King Abdullah II of Jordan and some leaders in the US congress in January have surfaced indicating the king admitted that Jordanian and British special forces were active in Libya and that he called for overcoming the ideological differences of the cold war era and religious differences and to rather focus on fighting the looming third world war against Islamist extremist groups.

Officially, Britain has not sent troops to Libya but the leaked document, relayed by Middle East Eye, stated that Abdullah “expects a spike in a couple of weeks and Jordanians will be imbedded [sic] with British SAS, as Jordanian slang is similar to Libyan slang.”

The King of Jordan, a close ally to the US, deplored the latter’s “not clear” objectives to tackle the Islamic State which led to cooperation with Britain for “counter-insurgency warfare” and not a “traditional open warfare.”

He added that “Jordan is looking at al-Shabaab” contrary to other countries and that the group has begun to “feed into Libya.”

The king warned that “the problem is bigger than ISIL, this is a third world war, this is Christians, Jews working with Muslims against Khawarej, outlaws.” He lamented that Israel “looks the other way” with regards to al-Nusra which controls some territories on the Israeli-Syrian border because it is considered “as an opposition to Hezbollah”

He also pointed fingers at Turkey claiming that president Erdogan “believes in a radical Islamic solution to the problems in the region” and terrorists going to Europe is part of Ankara’s policy.

US congressmen refused to comment on the contents of the leaked document and Jordan’s Royal Court political director Dabbas said “the discussions we had in Washington were off the record.”