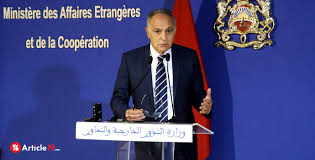 Morocco is maintaining contacts with the military component of the MINURSO and remains committed to cooperation with this component in the framework of the mandate entrusted to him, said Foreign Minister Salaheddine Mezouar Thursday, explaining that Rabat’s recent decisions to remove the UN staff from the Moroccan Sahara are legitimate and proportionate to the UN Head’s recent blunder which harmed the kingdom.

“Contacts between the Moroccan Royal Armed Forces and the UN military staff of MINURSO are still ongoing in order to maintain the cease-fire in normal conditions,” Mezouar said at a news conference in Rabat.

“Morocco has on many occasions expressed its willingness to provide backing and the necessary logistical support to enable the MINURSO military staff fulfil its mandate in good conditions,” he said, after a meeting with leaders of Political parties and trade unions.

The Foreign Minister also pointed out that contacts between Rabat and Mrs Kim Bolduc, the UN Secretary General’s special representative to the MINURSO, are going on normally and that Morocco remains open to a constructive and responsible dialogue with no pre-conditions in a spirit of mutual respect. “Such a dialogue should not ignore the reasons behind the current situation, on the one hand, and seek to rebuild trust and to save the political process that has been undermined by Ban Ki-Moon’s blunders, on the other,” Mezouar said.

The UN has earlier this week closed its military office in the Moroccan city of Dakhla at Rabat’s request. It also repatriated around 80 members of its civilian staff stationed in the disputed the territory.

Mezouar reiterated Morocco’s standpoint on its territorial integrity, saying the Kingdom “boldly” endorses the recent decisions it made in response to Ban Ki-Moon’s biased remarks. These decisions “are final and irrevocable” and are based on a national consensus and unconditional support of all components of the Moroccan people, he said.

Also on Thursday the Moroccan government underscored, following the weekly cabinet meeting, that the measures taken are proportionate to the grave mistakes made by the UN Head during his last trip in the region which took him to Mauritania and Algeria.

”The Moroccan government re-affirms its utter rejection of anything that can harm the country’s territorial integrity or any move seeking to provoke the Moroccan people,” said Mustafa El Khalfi, the government spokesman after the cabinet meeting.

The cabinet also indicated it was resolutely standing by the king in the preservation and the defense of the integrity of the national territory.