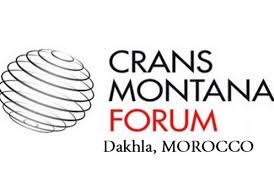 After the resounding success of its 2015 session held in Dakhla, the Crans Montana Forum decided to hold the 2016 session in the same city that it describes as “the Pearl of the Southern Territories of Morocco” and “a key model for all countries of Africa.”

The Forum on “Africa & South-South Cooperation, toward a better Governance for a sustainable Economic and Social Development” kicked off Thursday in the presence of scores of decision makers from around the world, including heads of Government, former heads of State, officials, academics and experts.

The Crans Montana Forum 2016 session is held in “a city and a region showing that no fate can resist a determined policy of development,” the Forum said in a press release.

Far from being fortuitous, the choice of the Swiss Forum to hold another session in Dakhla stems from the fact that this city is “a unique and impressive experience in Africa. It represents an original territorial governance made of completely innovative concepts,” the release stated, adding that the Forum is held in “a city and a region that demonstrate that no fate can resist a determined policy of development.

“We’re back with conviction and enthusiasm to pursue an open and constructive dialogue between major global players in politics and the economy,” insists the Crans Montana Forum in its statement.

For the president of the Forum, Pierre Emmanuel Quirin, this edition is that of the “junction” between what was done in 2015 and what remains to be done and confirmed that “the time of the global integration of Africa has come and that growth and economic development are the goals.”

The Forum to run from March 17 to 22, features fifteen panels that will debate diverse topics such as energy security, Africa’s world integration, women and governance in Africa, religious leaders and education to environmental protection, improving the living conditions of populations, opening new hubs to South-South Cooperation and the role of Morocco in Africa.

A follow-up meeting of the 2nd Morocco & Pacific Island States forum convened in Rabat in December 2015 is also scheduled.

The panel will discuss national and regional development priorities, strengthening political and economic cooperation between Morocco & the Pacific region and the role of the international community in the protection of the Pacific Island States and the promotion of their sustainable development.

Created in 1986, the Crans Montana Forum (CMF) is an influential Swiss NGO working for the promotion of international cooperation and growth in the world.