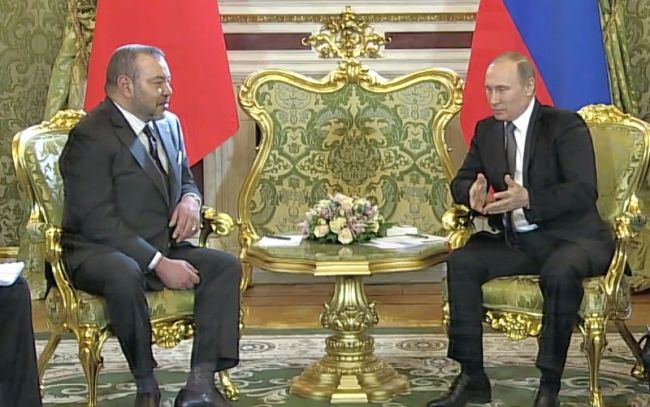 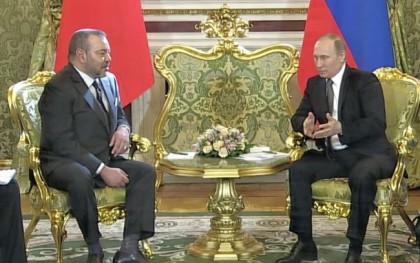 King Mohammed VI who is currently on an official to Russia held a meeting in the Kremlin Tuesday with President Vladimir Putin.

The contents of the talks were not disclosed, but Russian Deputy Foreign Minister and Special Representative of President Putin Mikhail Bogdanov, had earlier said that President Putin was looking forward to discussing with King Mohammed VI all issues of common interest, including the latest developments in the Middle East and North Africa and the ongoing efforts to fight terrorism.

After their talks, the two countries’ leaders chaired over the signing ceremony of several agreements and memoranda of understanding covering extradition mechanisms between the two countries, air services, environmental protection and rational use of natural resources, fisheries, the promotion and reciprocal protection of investments, mutual protection of confidential military and military-technical information as well as a joint action tourism program for the 2016-2018 period.

A Moroccan-Russian declaration on the fight against international terrorism was also signed during the ceremony, in addition to other MoUs in the fields of energy, culture, geological research and exploration of the subsoil, and veterinary and phytosanitary supervision.

All these agreements are meant to give a new momentum to the Moroccan-Russian strategic partnership sealed during the Sovereign’s first official visit to Russia in 2002.

Before heading to the Kremlin, the Sovereign had laid a wreath at the Tomb of the Unknown Soldier.

On Monday, the two countries’ economic operators discussed at a meeting ways of upgrading and diversifying trade relations between the two countries and announced the creation of an economic council tasked with giving a new impetus to Moroccan-Russian economic partnership.

As put by the chairwoman of Moroccan employers’ association (CGEM) Miriem Bensaleh-Cheqroun, the economic council will strengthen the strategic partnership between Morocco and Russia and open to Russian investors the multiple opportunities offered by Morocco, especially in the realms of industry, renewable energy, agriculture, fishing and tourism.
Echoing her, chairman of the Russian-Moroccan Business Council Yuri Sharov said the new economic council will promote economic relations and increase the volume of investments between the two countries.
The economic operators signed during their meeting four partnership agreements dealing with the sectors of industry, energy, pharmaceutical industry and agri-business.

North Africa Post's news desk is composed of journalists and editors, who are constantly working to provide new and accurate stories to NAP readers.
NEWER POSTSahara: Russia Joins its Voice to Morocco’s
OLDER POSTBan Ki-Moon Angry at Moroccans’ Anger against his Biased Statements