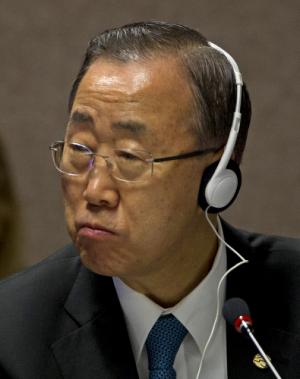 Ban Ki-Moon Angry at Moroccans’ Anger against his Biased Statements

The UN Secretary General Ban Ki-moon has considered the march staged in Rabat last Sunday with the participation of over 3 million Moroccans, in response to his biased remarks on the Sahara issue, as a “lack of respect” towards him and towards the UN.

Ban Ki-moon held a meeting Monday in New York with Morocco’s Foreign Minister, Salaheddine Mezouar, to exchange views on the state of efforts to settle the Western Sahara dispute, as well as his recent visit to the region to explore ways to intensify the negotiating process.

After the meeting, Ban’s spokesman issued a statement saying that the UN Chief “also conveyed his astonishment at the recent statement of the Moroccan Government and expressed his deep disappointment and anger regarding the demonstration that was mobilized on Sunday 13 March, which targeted him in person.”

According to the statement Ban Ki-moon stressed that “such attacks are disrespectful to him and to the United Nations.”

The statement said that “the Secretary-General took note of the misunderstanding related to his use of the word “occupation” as his personal reaction to the deplorable humanitarian conditions in which the Sahrawi refugees have lived in for far too long” in the Polisario-run Tindouf camps in Algeria.

The Spokesman’s statement also said that “the Secretary-General underscored to the (Moroccan) Foreign Minister that he has adhered closely to the Security Council’s mandate,” and that “the UN chief reiterated his 4 November 2015 call for genuine and serious negotiations without preconditions to make progress soonest.”

If Ban Ki-moon was reacting on a personal basis, one cannot understand why he involved the UN which has been observing neutrality in the issue it has been handling for decades.

Actually, as underlined by the Moroccan government in the statement it issued to decry the UN Chief’s inappropriate and biased remarks, neither the UN nor any former UN Secretary General have used the word “occupation” when talking about the Sahara.

Ban Ki-moon visited the region two weeks ago to supposedly revive the stalled settlement process through reactivating the negotiations meant to reach a just, lasting and mutually acceptable political solution. Apparently his goal was not fulfilled since all he did was to irk the Moroccan people.