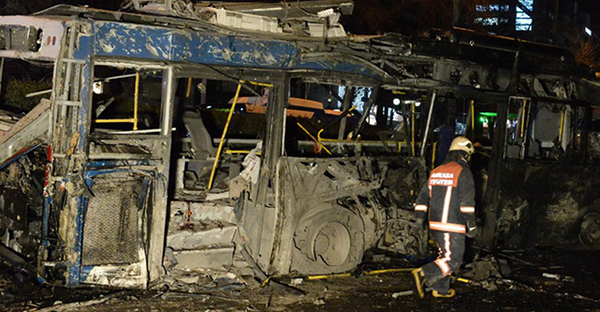 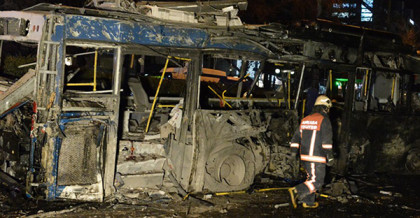 Following the Sunday attack in Ankara which killed more than 30 people, Turkey’s President vowed to defeat terrorists who are wreaking havoc on his country, become one of their targets because of instability in the region.

After a briefing with his Interior Minister Efkan Ala, Recep Tayyip Erdogan who was in Istanbul condemned the attack and tried to calm down Turks, saying “the struggle against terrorism will for certain end in success.”

“Terror attacks – which intend to target the integrity of Turkey, and the unity and solidarity of our people – do not diminish our will to fight terror, but further boost it,” he added.

Turkish authorities have pointed blaming finger at Kurdish PKK fighters. However Turkey’s pro-Kurdish party The Peoples’ Democratic Party also accused by authorities to champion Kurdish interests has condemned the attack saying that it shares the sorrow of its co-citizens.

A car laden with explosives went off in central Ankara near the Prime Minister’s office, several foreign embassies, and the Turkish Parliament. The blast set other vehicles on fire and shattered windows of shops at scene.

According to Turkish Health Minister, Mehmet Müezzinoğlu at least 37 people have been killed and 125 wounded. He said 30 people died at the scene of the attack while four others died on their way to hospital. Speaking at a joint press conference with Interior Minister in Ankara after a cabinet emergency meeting, Müezzinoğlu added that one of the assailants is among the 30 dead.

World leaders have conveyed sympathy to the Turkish people, describing the attack as “inhuman,” “horrific,” and “barbaric.”

The attack is the second in a month in the Turkish capital. On February 17, a suicide bomb attack hit military shuttles killing 29 people and injuring 81 others. Authorities pinned the blame on the Kurdish militants.

North Africa Post's news desk is composed of journalists and editors, who are constantly working to provide new and accurate stories to NAP readers.
NEWER POSTPalestine: Hamas Seeks to Smooth Ties with Cairo
OLDER POSTSunday March, a Plebiscite for the Sahara as Morocco’s