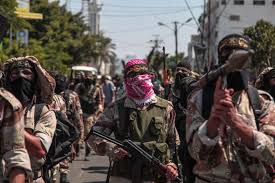 The Hamas delegation that arrived in Cairo on Saturday held its second round of meetings with Egyptian security officials on Sunday in a bid to ease tensions between the two sides.

The delegation’s visit takes place a week after Egypt accused Hamas and the Muslim Brotherhood of cooperating in the assassination of Hisham Barakat, the country’s Attorney General, in June last year.

Although the matter is expected to be discussed, a source said Hamas was invited by Egyptian security officials before the accusations were made.

The 12-man senior delegation entered Egypt through the Rafah crossing point and was escorted under heavy security.

The Gaza-based group said it is eyeing “a new phase in its relationship with Cairo.”

According to the delegation, the Cairo talks covered bilateral relations and the burdens Gaza faces, particularly the border crossings, as well as the latest developments in the Palestinian territories.

Hamas delegation is expected to enquire about the whereabouts of its members who disappeared on Egyptian territory.

Relations with Cairo have worsened since the arrival of President Sisi and some authorities have accused Hamas of collaborating with militant groups in Sinai. The militant group has always denied any collusion with Egypt-based militants and its spokesperson Samy Abo Zuhri affirmed their “commitment to the security and stability of Egypt and that it is keen to maintain positive relations with Cairo.”

Egypt has served as one of the major peace brokers during hostilities between Palestine and Israel. Tensions in the Sinai Peninsula have forced Egypt to take a tough stance against smuggling and other activities along its border with Gaza.