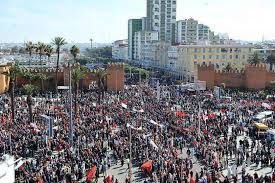 Over three million Moroccans from all over the country and from all walks of life flocked to Rabat this Sunday March 13 to protest the UN Secretary General’s recent inappropriate remarks about the Sahara issue and to send out to the world the message that the Kingdom’s territorial integrity is sacred and that Moroccans shall never tolerate that anyone crosses this red line.

Leaders and members of Moroccan political parties, trade unions, civil society activists and NGOs in addition to lambda citizens started arriving in Rabat since Saturday to be in the first ranks of the demonstrators lashing out at Ban Ki-moon for departing from his impartiality and neutrality and for making statements that ran counter to UN Security Council resolutions during his recent visits to the Polisario-run Tindouf camps and to Algiers.

Long before the official start of the protest march, down town Rabat was packed and demonstrators from all the Moroccan regions, North and South, East and West, stood side by side to reaffirm, if need be, the nation’s consensus and unanimity regarding the Moroccan Sahara.

Amidst chants of the national anthem and patriotic slogans, the demonstrators decried Ban Ki-moon’s missteps and biased statements and brandished thousands of banners, saying among others “Ban Ki-moon threatens the UN peace process;” “International law is not for sale;” “Ban Ki-moon has violated the UN Charter;” “All united in solidarity for our Sahara;” “No to biased mediation!” and” the Sahara is Moroccan and Moroccan the Sahara shall remain.”

On Saturday, the two houses of the Parliament held an extraordinary session and issued a joint statement wherein MPs strongly condemned as “provocative and biased” the UN Chief’s stance.

The comments made by Ban Ki-moon “ignore the noble objectives” of the United Nations and are a “blatant breach” of the principle of impartiality that the UN Secretary General must observe, the statement said, adding that his “deliberate breach” of the UN principles aims to hide his failure, during his two terms at the helm of the world body, to make any tangible progress towards the settlement of the Sahara issue.

MPs also expressed strong indignation over the fact the UN chief ignored the sufferings of the people sequestered in the Tindouf camps and massive violations of human rights in these camps.
Through this outburst of patriotism, reminiscent of the Green March whereby Morocco recovered its Spanish colonized southern provinces, Moroccans have not only denounced the UN Chief for his biased statements and unacceptable behavior during his recent trip in the region but they also told the world that they will never, ever give up an inch of the Moroccan southern provinces and that they will never, ever accept the idea of creating another fragile micro-state in an already fragile and dangerous region.

North Africa Post's news desk is composed of journalists and editors, who are constantly working to provide new and accurate stories to NAP readers.
NEWER POSTSunday March, a Plebiscite for the Sahara as Morocco’s
OLDER POSTLebanese Hezbollah Listed Terrorist Organization in Arab World