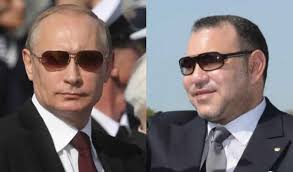 The announcement was made Friday by the Ministry of the Royal Household, Protocol and Chancellery, which said in a communiqué that during the visit, the king will hold official talks with President Vladimir Putin and that the two leaders will preside over the signing ceremony of a series of agreements.

King Mohammed VI will meet several other senior Russian officials during the trip that falls within the framework of the strengthening of “the strategic partnership” existing between the two countries, the communiqué said.

The Moroccan King’s official visit to Russia, announced and postponed several times, notably in mid-2014 and the end of 2015, will finally take place, at a time the regional and international juncture is facing multi-faceted challenges.

The visit will provide an opportunity for both countries to upgrade their political and economic bilateral relations and also to exchange, at the highest level, their standpoints on several topical issues of common interest, notably the fight against terrorism, the situation in Syria and Iraq, and other regional conflicts.

The Sahara conflict will undoubtedly figure high on the agenda of Moroccan-Russian talks as the royal visit will take place on the eve of the adoption by the UN Security Council of the UN Secretary General’s periodical report on the developments of the issue. The report is usually presented in the course of the month of April.

The royal visit also comes as relations between Morocco and the European Union have been lately going downhill over the Sahara issue and as Rabat announced it was freezing all contacts with the EU institutions.

Rabat made the decision to protest the ambiguity and the lack of transparency on the part of the EU members following a December 2015 ruling by the European Court of Justice, invalidating the EU–Morocco agreement on reciprocal liberalization measures on agricultural products and fisheries, arguing that the text approved the implementation of the agreement in the Sahara.

Russia’s relations with the European Union are also tense since 2014, when Brussels joined Washington in accusing Moscow of fueling the Ukrainian crisis and imposed several rounds of sanctions as a punitive measure.

In response to the Western restrictive measures, in August 2014, Russia announced a one-year food embargo on some products from the EU States that imposed sanctions against it. The ban has since been extended for another year.

Given this context, Russia could be a promising market for Moroccan agricultural products and Morocco an interesting outlet for Russian exports.

Prior to the royal visit, the King’s advisor Fouad Ali El Himma made a trip to Moscow on January 27 and met with several Russian officials, including Secretary of the Russian Security Council, Nikolai Patrushev.