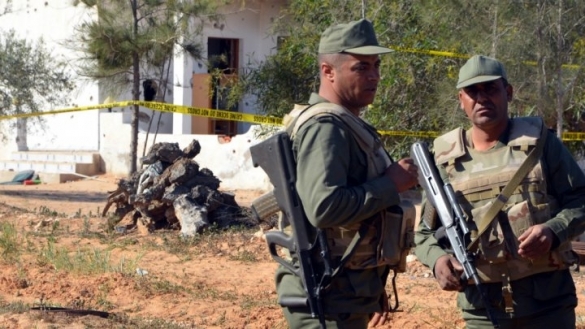 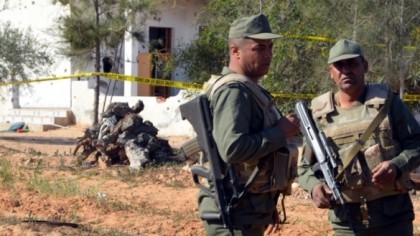 Tunisian security forces killed early Monday 13 terrorists and arrested 6 others after assailants launched twin attacks against a military barrack and security check points at Ben Guerdane, in the governorate of Medenine.

The Defense Ministry spokesman Belhassen Oueslati told reporters that forces took control of the situation after a group of terrorists launched coordinated attacks against the military barrack of Ben Guedane and military check points.

13 terrorists have been killed and 6 others have been made captives while there are 6 casualties among the security forces, including 2 members of the National Guard, 2 police officers and 2 soldiers. Six civilians have also been wounded in the gun battle.

In a different development, Tunisian Defense Minister Sunday announced arrival this week of American and German experts to help install a monitoring electronic system at the border with Libya, part of the country’s move to foil illegal crossings by terrorists into Tunisia.

For Farhat Horchani the electronic system will play a paramount role in the protection of the country’s lengthy border with troubled Libya. He also indicated that the system is a complementary measure to already completed sand trenches and barriers.

He also announced the use of drones to monitor permanently the border in a bid to detect any intrusion attempts.

Horchani furthermore specified that talks have been initiated with other neighboring countries to expand the surveillance system to maritime, air and land levels in order to control areas where terrorist threats are most alarming.

Aside from the American and German experts, Tunisia should also welcome British troops to help strengthen and improve surveillance at the border with Libya. Early last week, British Defense Secretary Michael Cathel Fallon announced that some 20 British troops would head to Tunisia to train local forces how to bolster security at border with war-torn Libya.

Tunisia has been embroiled in security instability after IS-trained terrorists perpetrated last year three terror attacks which claimed lives of more than 70 people, most of whom were foreign tourists.

Authorities moved on to beef up security at border with Libya after it appeared that terrorists killed on February 19 in US air raids in the Libyan western city of Sabratha were planning further terrorist attacks in Tunisia.

Tunisia has become the second country in the region to witness an upsurge in the number of attacks after Libya, experts say.