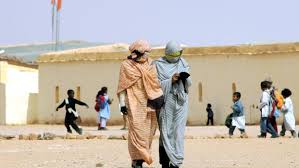 Human Rights Watch has urged the UN Secretary General Ban Ki-moon who is currently touring the Maghreb region to intervene in favor of Sahrawi women who are prevented by their families from leaving the Polisario-run Tindouf camps for Spain, where they legally reside.

HRW called the UN chief to seize the opportunity of his visit to Tindouf this Saturday (March 5) to intercede with the Polisario leaders for the release of the women so that they can reunite with their Spanish adoptive parents.

In a report published on its website, the New York-based NGO asks the UN Secretary General to discuss “the worrying case of the sequestered young women” in his talks with the Polisario leaders and ask that their biological families release them as soon as possible.

“When he meets with the Polisario Front’s General Secretary, Ban Ki-moon should raise rights violations, including the women’s illegal confinement,” Human Rights Watch said. “He should also remind Algerian officials, whom he plans to meet in Algiers on March 6, 2016, of their legal responsibility for ensuring respect for the rights of everyone on Algerian territory, including residents of the refugee camps.”
“Holding an adult against her will is illegal confinement, whether or not the captors are relatives who love her,” said Sarah Leah Whitson, Middle East and North Africa director. “The Polisario should ensure these women can exercise their freedom of movement and that past and future acts of illegal confinement are punished as crimes.”
HRW which mentioned the cases of the three Sahrawis, namely Nadjiba Mohamed Kacem, Darya Embarek Selma and Mahdjouba Mohamed Hamdidaf, said these women are among the thousands of Sahrawis who, as children growing up in the refugee camps, participated in summer programs in Spain, hosted by Spanish families. Some grew close to their host families and elected to remain in Spain upon reaching adulthood.
The three separately traveled to the camps to visit their families. When the time came for them to return to Spain, the families blocked their departure, according to accounts given to Human Rights Watch, which said there are reports of other, similar cases in the Sahrawi refugee camps, although details have been difficult to confirm.
Ban Ki-moon’s visit in the Tindouf camps and in Algiers, his first as secretary-general, is part of a UN commitment to advance a political settlement to the 40-year-old conflict over the Sahara, a former Spanish colony retrieved by Morocco in 1975.

Ban Ki-moon who was on Friday in Mauritania was also due to visit Morocco but the trip was postponed to July at Rabat’s request.