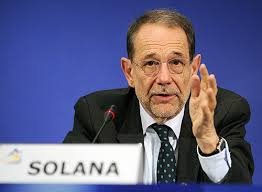 The current tense economic and political situation prevailing in Algeria may lead the country into chaos and uncertainty if current government policies, associated with falling oil prices, continue.

The observation was made by former Spanish Foreign Minister and former EU Foreign Policy Chief Javier Solana in an analysis of the situation in Algeria, published by the Prague-based Project Syndicate which circulates commentary and analysis on global affairs from academics, scientists, activists, economists etc.

Solana indicated that the world has forgotten Algeria which has been embroiled into a silent politico-economic complicated situation even though the country succeeded in resisting the “Arab Spring” which swept through the Arab world.

For him the current tumultuous political situation marked by recent constitutional reforms limiting presidential terms to two and granting more freedom, even though deemed insufficient by critics, are signs that the country is unstable and the regime is working to appease popular anger.

“What is not in doubt is that the reforms come at a sensitive time, when Algeria is plagued by political and economic uncertainty,” Solana said.

He also pointed out that President Bouteflika’s recent modification of the country’s security apparatus and the replacement of prominent military officers such as Mohamed Mediene, who had been chief of the intelligence services since 1990, by close aids, also evidence the country’s instability.

Algeria’s future remains unclear and worrisome given President Bouteflika’s ailing health condition which has been preventing him from making any public appearance for a good period of time now. For Solana with such a situation, the 2019 presidential elections will turn out to be a puzzle and may throw the country into abyss.

The Spanish diplomat tackled the economic situation which he described as most dramatic, pointing out that the fall of the country’s revenues due to the collapse of oil prices has made a dent in the Algerian government’s capacity to cover basic needs of the populations.

“Significant external challenges have exacerbated Algeria’s situation. In particular, with the oil and gas industry accounting for fully 97% of Algeria’s export income, the sharp decline in oil prices since June 2014 has underscored the unsustainability of the country’s economic model,” he said.

Solana argued that the government is forced to increase and create new taxes. However he warned that such measures if pursued risk compounding the social frustration and anger with a younger generation of Algerians unable to put up with the situation.

“In this social context, and if economic hardship persists, protests and even revolt may not be a distant prospect,” he explained.

He furthermore indicated that for the government to prevent such a situation, it must diversify the economy.

Solana’s fear for a disastrous situation is seemingly shared by the Algerian Prime Minister Sellal who told reporters Thursday, on the sidelines of an address to the parliament, that the government would launch bond loans with an interest rate of 5 per cent in a bid to control the financial crisis plaguing the country. He also indicated such as a measure would prevent the country from going for a foreign stimulus package.

“Our aim is to control our economy. We have already adopted some measures that will prevent us from going for foreign indebtedness,” Sellal said.