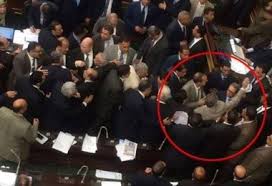 Controversial Tawfiq Okasha came under fire by Parliament colleagues after MP Kamal Ahmad threw him his shoe on the head as he entered the House for Sunday session.

Other deputies accused the Okasha for meeting Koren on Thursday with whom he had dinner and discussed ties between the two countries as well as Egypt’s feud with Ethiopia over the Great Renaissance Dam. Israel’s embassy indicated on its facebook page the discussions were fruitful.

“I expressed the Egyptian people’s opinion. This shoe wasn’t just intended for Tawfiq Okasha’s face and head, but also for the Knesset and the Zionist entity,” Kamal Ahmad said in a video posted on the newspaper Al-Shuruq’s website.

This is the second incident in the parliament involving Okasha who last week criticized Parliament Speaker Ali abdel-Aal saying that he was not qualified for the position and also called for early presidential elections. After that incident, Okasha was reportedly subject to internal investigation for his statement.

Other Parliamentarians indicate that he could be withdrawn his parliament membership.

Meeting or exchange with Israelis is seen in Egypt as treason even though Egypt was the first Arab country to sign a peace treaty with Israel in 1979.

Cairo was angered fearing that the statement could spark public outrage and animosity against the regime.

Al-Sisi, reportedly supported by Israel, has sought to warm up ties. He appointed Hazem Khairat as Egypt’s new Ambassador who took office last week after presenting his letters of credentials to the Israeli President Reuven Rivlin.

Israel reopened its mission in Cairo in September after angry Egyptians had stormed the compound in 2012.