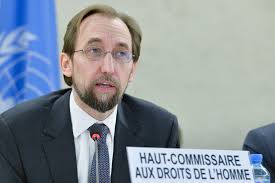 Presenting the report on the situation of human rights in Libya between 2014 and 2015, the UN Right Commission head Zeid Ra’ad al-Hussein painted a dramatic situation as he said: “A multitude of actors, both state and non-state, are accused of very serious violations and abuses that may, in many cases, amount to war crimes.”

The report highlights cases of killings and executions, indiscriminate attacks, cases of arbitrary detention, abduction and disappearances, including enforced disappearances.

According to the report, more than 9,000 people are currently detained at the secret centers operated by the Ministry of Justice and the Department for Combating Illegal Migration of the Ministry of the Interior.

The commission also argued that interviews of the former detainees revealed that only few were formerly charged with any criminal offense. Some were unaware of the reasons of their detention or arrest.

The authors of the report also underlined that rival groups in war-torn Libya were involved in torture and ill-treatments of detainees. They also argued that such practices became rampant and unpunished and did not spare women and children.

The report highlights in this vein death threats and harassment received by women activists and the UN experts documented the assassination of women activists such as Salwa Bugaighis, Fareeha Al-Berkawi and Intissar Al-Hasaeri.

According to the report, many women subject to sexual assaults, violence and other abuses are scared to denounce their assailants for fear of retaliation.

Children were enlisted by force in armed groups mostly in groups pledging allegiance to IS.

High Commissioner Zeid Ra’ad al-Hussein urged the UN to prosecute those responsible for the crimes. He also urged continuing monitoring of the human rights situation in Libya and the establishment of a mandate of independent expert on Libya, to report to the Council on progress made towards accountability and on the situation of human rights.