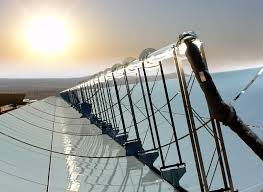 After the first plant of Noor-Ouarzazate solar complex in Morocco started operating few weeks ago, materializing the country’s efforts to boost renewable energy sources, reduce dependence on fossil fuels and become a green-power leader in the region and the world, neighboring Algeria unearthed its own renewable energy program.

At a meeting Monday with some members of his cabinet focused on energy issues, President Abdelaziz Bouteflika called for developing renewable energies to help the country secure its energy independence permanently and also to generate a dynamic of economic growth.

He went as far as calling the renewable energies development program “a national priority.”

Some critics of the country’s management as a whole mockingly wondered why it took him so long to realize that the program adopted in May 2015 is crucial for the country, while others candidly thanked Morocco for having launched its solar energy farm, prompting Algeria to follow its steps.

When Morocco inaugurated earlier this month one of the biggest solar farms in the world, Algerian media, which is usually critical of the Kingdom, hailed as “spectacular” the growth and development achieved by their neighbor, although it has “neither oil nor gas.” The local media had then lashed out at the Algerian Government which shelved its renewable energy program.

Algeria’s energy consumption is so far based on hydrocarbon resources but as hydrocarbon output is declining, the country needs to develop other energy resources.

During the Monday meeting, Bouteflika called for implementing the renewable energies development program and also urged to intensify natural gas prospection and to refurbish gas fields that are underexploited