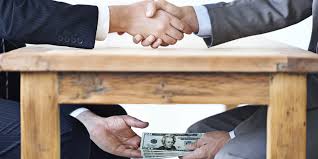 Tunisia: one Third of Companies Paid Bribe in 2015

One third of companies established in Tunisia paid bribes to the public administration for various reasons, whether to accelerate procedures or reduce tax.

A survey on the business environment in 2015 covering 1,200 companies indicates that one out of three companies was involved in graft in order to get favours from public authorities.

According to the research conducted by the Tunisian Institute of Competition and Quantitative Researches (ITCEQ), 32 per cent of the companies point out that Tunisian customs is one of the most corrupt state institutions.

The research also finger-points public services (15%), public procurements (12%), inspection and control services (12%) as well as the health and hygiene controls (10%) as other most corrupt domains of the Tunisian administration.

The survey revealed that the bribe paid to the administration presented 0.62 of the companies’ turnovers.

Prime Minister Habib Essid appearing before the parliament in January to propose strategies to halt public anger which nearly threw Tunisian into a new revolution and address unemployment was criticised by opposition lawmakers who blame the government’s failure to fight corruption which has become even more rampant in post Ben Ali era.

North Africa Post's news desk is composed of journalists and editors, who are constantly working to provide new and accurate stories to NAP readers.
NEWER POSTGabon Resolved to Remove Roadblocks for Moroccan Companies
OLDER POSTLibya: National forces flash IS out of Benghazi