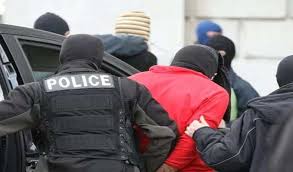 The Tunisian Interior Ministry announced Monday it arrested 16 jihadist suspects in the governorate of Jendouba who were planning to set up a training camp.

A group of seven was first arrested in the town of Ouez Meliz after security forces were tipped about the presence of suspicious people.

Investigation and interrogation of the seven individuals revealed that the men were planning to set up a training camp on Jendouba Mountains.

The interrogation led to the arrest of eight other takfirists, one of whom was shot at the shoulder after he fired at security forces, said the Ministry, adding that guns and ammunition were seized. During the operation, a 60-year old civilian was accidently shot dead.

Also on Monday, the Defense Ministry indicated a terrorist had been killed in an exchange of fire with a military unit in a mountainous area of central Tunisia.

Tunisian security authorities are on high alert after it appeared that the Tunisian jihadists killed in Libya last Friday were planning terrorist attacks in the country.

Tunis has become the second country in the Maghreb that has witnessed a surge in terrorist attacks after Libya.