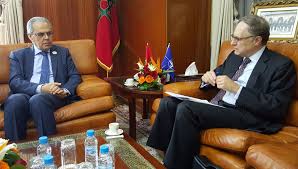 Morocco has been a beacon of stability in a region beset with strife, said NATO Deputy Secretary General Alexander Vershbow during his trip to the country last week.

The North African Kingdom has gone further than most to thwart the chaos and violence that seized so many countries in North Africa and the Middle East, not through repression, but by embracing reform, stressed Vershbow.

The social, political and economic reforms that have been implemented here have helped this country to chart a course of stability and progress, added the NATO official, hailing Moroccan efforts to spread moderate Islam throughout North Africa and the Sahel.

The North African country should be commended and should be proud of the progress it has made so far. “And I encourage you to continue along this path of reform,” he said.

“Morocco (…) is strong, confident and moderate. It has close relations with the European Union, strong bilateral relations with several NATO Allies, and it has proved itself to be a solid and reliable partner for NATO”, went on Vershbow.

For over two decades, both through the Mediterranean Dialogue and through NATO’s individual cooperation program, NATO and Morocco have been able to build a strong partnership, adapting to the North African Kingdom’s evolving security needs, he stressed.

Vershbow also hailed Morocco’s contribution to NATO missions in the Balkans – first in Bosnia-Herzegovina and then in Kosovo – and to Operation Unified Protector in Libya five years ago. And in the last few weeks, Morocco, he said, played a major role in seeking to promote a political solution to the Libyan crisis, hosting the UN-led consultations and actively trying to find a bridge between Libya’s warring parties.

Along with political reforms, it is deeply encouraging to see Morocco’s commitment to international cooperation, as it works with others to destroy ISIL and to maintain security within its borders, added the NATO Deputy Secretary General, describing Morocco as “a neighbour, a partner and a friend” that NATO can rely on.