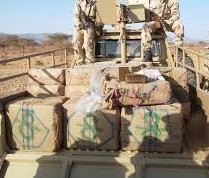 Predictions made years ago by many a pundit about the Tindouf-based separatists’ schemes to lay hand on the drug trafficking market in the Sahel-Sahara region have been confirmed once and again, and most recently by a Mauritanian official.

Ahmadou Abdel Malek, the official spokesman in France of the Mauritanian ruling Union for the Republic, told France 24 TV in Arabic that members of the Algeria-backed Polisario were involved in drug trafficking.

He made his assertions when commenting on the seizure in Mauritania earlier this month of two tons of cocaine and the arrest of dozens of traffickers of various nationalities.

“Mauritanian security agents and anti-drug forces have arrested several gangs in the past,” he said pointing out that “this is not the first time that they manage to capture a gang, formed mostly of Polisario members and citizens from the countries of the great Sahara who know perfectly the region…”

According to the UpR spokesman, “the latest operation has foiled their drug trafficking schemes.”

The Mauritanian website Sahara Medias, citing Mauritanian officials, had revealed that the trafficking network was made up of Polisario elements, in addition to Algerian, Mauritanian, Malian and Senegalese smugglers.

The network was using the Mauritanian territory to convey to Europe the banned substances coming from Latin America.

According to media reports, Mauritanian Security services were monitoring some elements of the separatist Front settled in the country, but the cocaine trafficking operation had been aborted thanks to tips provided by US intelligence agencies.

The operation revealed that the trafficking network was also operating in weapons and ammunition smuggling as arms trade in the Sahel-Sahara region is booming with the spread of Jihadists and terrorist groups.

In December 2010, key members of one of the Sahara’s largest drug networks were arrested in Mali and Mauritania. The network was known as “Polisario” because 90 percent of its members come from the Polisario-run camps in Algeria.

The Mauritanian army had killed two men and captured seven others during a raid on the traffickers on the eastern Mauritanian border with Mali. The alleged leader of the group, a Sahrawi called Sultani Ould Ahmadou Ould Baddi, aka Sleitine, was hit by a bullet in the abdomen. A couple of days later, Malian security forces announced the arrest of six “major” drug dealers in the Sahara desert.

All this shows the extent of the involvement of the separatist Sahrawi Front in various trafficking operations in such a vulnerable region.