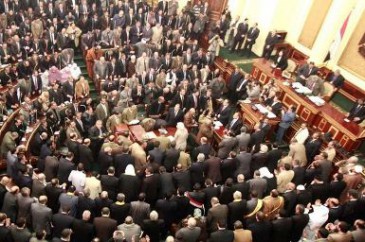 In his first address to the Egyptian parliament Saturday, President Abdel Fattah Sisi hailed the projects achieved by his government and affirmed that the transition to democratic rule was completed, acknowledging however that terrorism continues to be a challenge.

“From this place, under parliament’s dome, the Egyptian people declare to the entire world that they have laid the foundation of a democratic system and rebuilt constitutional institutions,” the president said.

He said his government has made in just 18 months major strides towards achieving a national project centered on the reestablishment of security and the revival of economy. He claimed that the multiple projects that were launched and completed will contribute to “redrawing the nation’s map.” Sisi said the country regained its regional and global influence that shrunk following the end of the Mubarak regime.

Focusing on the challenges, the president said the security forces “have managed to break the back of terrorism” in Egypt and they will continue “without laxity” as they strive for “progress and stability.”

Attacks by extremist groups are frequent in the North African country especially in the Sinai Peninsula.

President Sisi said confronting terrorism will not distract them from building “a democratic, civil and modern state,” in an indirect response to the critics accusing him of ruling the country with an iron fist and accusing his Government of having enacted laws restricting street protests and press freedoms, giving the police vast powers and allowing crackdown on the opposition.

In his message to the lawmakers, Sisi urged them to defend the state and “be aware of those who do not want for this country to be an exception in a troubled region” after it “succeeded in aborting a conspiracy” in reference to the short-lived Muslim Brotherhood-led government.

Analysts think however that Sisi’s speech will not appease criticisms of his Government.

North Africa Post's news desk is composed of journalists and editors, who are constantly working to provide new and accurate stories to NAP readers.
NEWER POSTSyria: A Cocktail War which Could Trigger a World War
OLDER POSTLibya: IS fleeing southwards dodging inexistent airstrikes