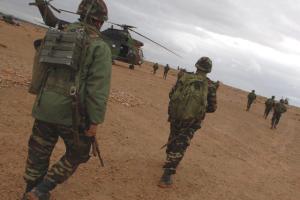 Moroccan ground forces will reportedly be dispatched to Syria to combat on the side of the Saudi-led combat forces to drive out Islamic States (IS) fighters.

Moroccan Arabic daily “Assabah” Monday quoted Saudi military sources as saying that Morocco will send troops to war-torn Syria to combat on the side of the Saudi-led coalition forces. “Aside from Morocco, Turkey, Kuwait, Bahrain, UAE and Qatar have announced they will send military troops in Syria,” Assabah said in its Monday publication.

Morocco’s involvement has been also confirmed by the US television network CNN which has indicated that Morocco has pledged to take part in Saudi-led operations.

The Moroccan local paper also indicates that a Saudi senior military officer told the American network that the Sunni Gulf giant is planning military drills in the north of the country in the framework of the future operation.

Another senior Saudi military officer according to reports said that the future drills will take place in March and around 150,000 soldiers from Saudi Arabia (majority of them), Egypt, Sudan and Jordan are expected to participate.

Morocco has been taking part in air operations in the US-led coalition shelling IS fighters’ positions in Syria.

President Assad’s regime has however warned against foreign intervention in Syria without its accord and his foreign minister Walid al-Muallem stated that it would be considered as “an aggression that should be resisted by every Syrian citizen.” He said they are “on track” to win the war after successive battle achievements.