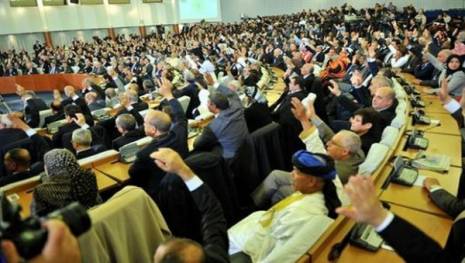 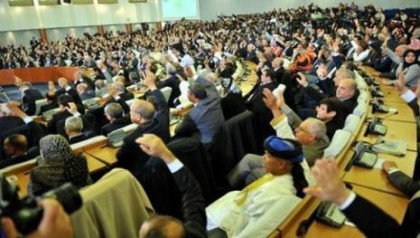 Algerian lawmakers Sunday re-introduced two-term limit into the national constitution formerly removed by President Bouteflika in a move to stay in power for life.

The two-term limit is part of a package of modifications adopted by 499 lawmakers to two, with 16 abstentions.

Long demanded by the opposition, the modification comes as the regime struggles to prepare for a post Bouteflika era. The 78 year-old ailing Algerian President has been unable to run the country even though Premier Sellal recently claimed President Bouteflika has been in full control of the country’s affairs.

In 2008, Bouteflika removed the constitutional restriction preventing him from running for a third term and even a fourth term in 2014.

The amendments supporters argue that return to the two-term will enable the country to build more democratic institutions and spare it political haggles.

The opposition cast doubt on the regime’s true intention saying the reforms will not end the ruling FNL’s predominance on the country’s political life.

According to former Prime Minister Ali Benflis who lost two times to Bouteflika in elections, the latest reforms are nothing but a constitutional coup adding that they only seek to settle rivalries that have cracked the ruling party.

The text which bans Algerians with dual nationalities from holding state positions is vividly criticised by the hundreds of thousands of France-settled Algerians holding the French nationality, as the amendments make of them dubious Algerians and potent traitors.

Human rights organizations also reject the new reforms as attempts by the regime to brush under the carpet the crimes it committed in the 1990s and which resulted in the death of 200,000 people.

The new text also bars Islamist parties from running for presidential elections, a way to avoid re-occurrence of the 1992 land slide victory of the Islamist Salvation Front. The FIS victory was followed by the dissolution of the party and bloody clashes with the army that marked the darkest pages of Algeria’s history with hundreds of thousands of people killed.