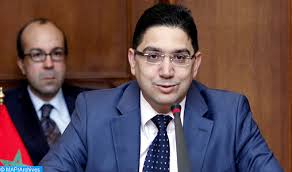 The nomination Saturday of career diplomat Nasser Bourita as Minister Delegate for Foreign Affairs and Cooperation was greeted without surprise in Morocco and also abroad.

All those who are following the activities of Moroccan diplomacy know that Nasser Bourita has been for years an active player in all outstanding events and activities, conferring with high-level delegations visiting the North African country, making trips to world capitals as a messenger or as his country’s representative in international forums and meetings of international agencies.

On the morrow of his nomination by King Mohammed VI in Laayoune, many media outlets recalled his outstanding participation in many international conferences (nuclear terrorism, Climate, anti-terrorism struggle etc.)

Nasser Bourita, born in 1969, is a career diplomat who started working in the Foreign Department in 1992 shortly after his graduation. He worked his way up in the ministry to occupy the position of Secretary General in 2011.

Nasser Bourita will probably be an asset for the Ministry and for the country, thanks to his diplomatic experience, his expertise in security and terrorism matters and his deep knowledge of the department and of all the dossiers of interest to Morocco, the Sahara issue among others.

According to some of his colleagues, Nasser knows by heart all the UN resolutions concerning the Sahara issue. This hard, tireless working man also knows how to convince his interlocutors that Morocco is sincere and serious regarding its autonomy initiative as a solution to the territorial conflict and prepares the ground for a political solution within the framework of regionalization.

Besides, his appointment seems all the more relevant since Morocco is to hold legislative elections next October and since both the Foreign Minister Salahedine Mezzouar and the other Minister Delegate for Foreign Affairs Mbraka Bouaida are affiliated to political parties. Both officials will therefore be busy with the electoral campaign for several weeks while Nasser Bourita, who is not member of any political party, will be there to ensure the proper functioning of the department. Also, if Mezouar and Bouaida leave the Government in case their parties rally the opposition after the coming polls, Nasser Bourita will be there to ensure continuity, irrespective of the results of the elections results.

The nomination of Nasser Bourita highlights the career of a multidimensional man, who will be the right man in the right place, who will consolidate Morocco’s successes at the diplomatic, economic and security levels and with whom Moroccan diplomacy will surely be in good hands.