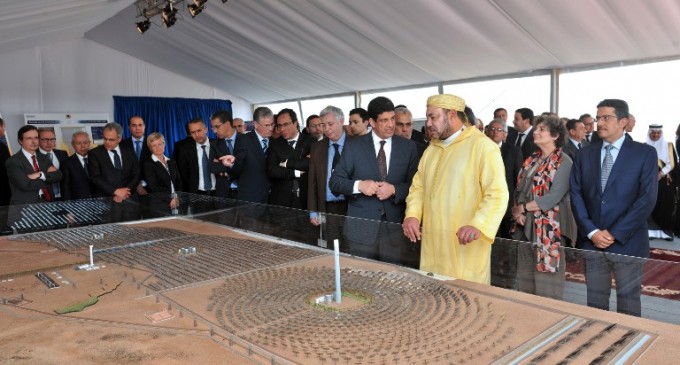 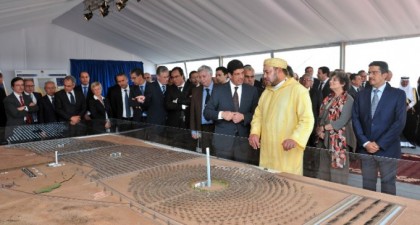 Morocco’s efforts to boost renewable energy sources, reduce dependence on fossil fuels and become a green-power leader took a step forward on Thursday with the entry into service of the first plant of Noor-Ouarzazate solar complex.

The dedication of the Noor-I solar power plant was chaired by King Mohammed VI who also launched the construction works of the second and third plants (Noor-II & Noor-III) of this large-scale solar power project.

The Noor-I plant, whose construction was launched in 2013, is meant to diversify the country’s energy resources, optimize the use of natural resources, preserve the environment, and sustain the country’s economic and social development.

The realization of the Noor-I station, the largest single-turbine power plant in the world to date with a production capacity of 160 MW, is an important stride in the implementation of large-scale renewable energy projects, and falls in line with the objective to raise the share of renewable energies in the national energy mix to 42 pc in 2020 and to 52 pc in 2030, as announced by King Mohammed VI during the COP 21 in Paris.

It will help meet the growing demand for electricity, as this demand has almost tripled since 1999, registering over 34,000 GWh at the end of 2015. Currently, Morocco imports 94% of its energy as fossil fuels.

The Noor solar complex is a high added value for the region of Ouarzazate, which is thus becoming the home to the largest consolidated solar power plant in the world, as it will contribute to socio-economic and cultural development, help the setting up of several nearby villages and the emergence of new tourism products.

As stated by Christopher Coats in a recent article published by Forbes Magazine, in recent years, Morocco has worked to reduce its dependence on foreign sources through the development of domestic projects, including exploring newly found traditional reserves and shale projects. “However, the state’s embrace of solar and wind has become a pillar of the country’s energy policy,” the commentator wrote.

He added that when adding the projects that are currently under construction in wind, solar and hydro, Morocco is on track to achieve a 43% renewable share by 2020 and intends to reach a 52% share by 2030, putting it ahead of many European countries.

“If achieved, this would put the country far ahead of regional neighbors in alternative energy contributions.