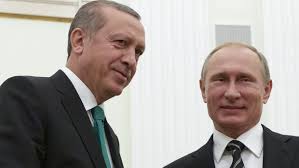 Turkey warns Russia of “detrimental” consequences after another airspace violation

President Erdogan warned Russia to refrain from violating Turkey’s airspace or it will “endure the consequences.”

The warning was expressed after the Turkish Foreign Ministry said on Saturday that a Russian SU-34 fighter jet violated Turkish airspace on Friday.

Russia violated Turkish airspace in November and Ankara responded by firing down the jet after repeated warnings but Moscow refuted the claims stressing that it was within Syrian airspace.

Erdogan told reporters upon departure for Chile that the latest Russian “infringement which came despite all our warnings in Russian and in English is meant to escalate the crisis in the region.” He warned that its continuity will lead to consequences without going into details as he lamented that “these irresponsible steps do not help the Russian Federation, NATO-Russia relations or regional and global peace” because “they are detrimental.”

Spokesman Major General Igor Konashenkov of the Russian Defense Ministry said the allegations are part of Ankara’s “unsubstantiated propaganda” as he questioned their ability to determine the aircraft’s nationality. He explained that Turkey has not provided any proof of visual contact because it is the only way to establish the national identity of a warplane flying in combat missions with its transponder turned off. Konashenkov added that Turkey’s airspace controlling radar stations can only determine the altitude, flight line, and speed of an aerial vehicle, but not its type or state affiliation.

NATO and the US confirmed the allegations that Russia violated Turkish airspace and they both called for calm as they reiterated their support for the respect of Turkey’s territorial integrity.

Following the violations, Ankara has raised its military security alert to orange, its highest level of combat readiness.

North Africa Post's news desk is composed of journalists and editors, who are constantly working to provide new and accurate stories to NAP readers.
NEWER POSTSyria: Talks without Talks
OLDER POSTMorocco Takes Set of Measures to Mitigate Effects of Drought on Rural World