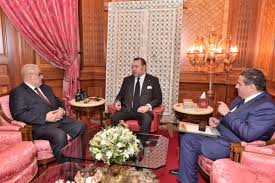 Morocco took a number of measures worth over $5 million to help farmers and mitigate the impact of the current drought on the rural world.

The measures were announced on the morrow of the meeting King Mohammed VI convened on Thursday with the Head of Government Abdelilah Benkirane and Minister of Agriculture and Fisheries Aziz Akhannouch to discuss ways of supporting farmers in this difficult junction.

In this vein, the King urged the cabinet to supply drinking water to remote areas most severely affected by rain shortfalls, to supply animal fodder and water to cattle breeders while ensuring veterinary checkups and immunization to livestock, and to protect solidarity-based farming, which plays an outstanding role in income and job generating.

The King stressed the need to assist farmers in getting ready for the coming agricultural campaign and to promote spring crops.

Part of the measures announced Friday by the Ministry of Agriculture, barley will be available throughout the country for 2 DH/KG (less than 50 cents) to safeguard livestock. Distribution and transportation of the subsidized barley will be ensured by the State.

Many water points will be adjusted, developed or constructed to secure water to the cattle and immunization campaigns will be launched.

To protect plant resources, some 93,000 hectares in rainfed areas will be irrigated part of a program seeking to optimize the use of water resources and moves will be made to store cereal seeds for the next season.

The measures also provide for an agricultural insurance system that secures farmers’ products.

This 2015-2016 agricultural season is marked by a rainfall deficit of 63% compared to a normal rainfall year.

North Africa Post's news desk is composed of journalists and editors, who are constantly working to provide new and accurate stories to NAP readers.
NEWER POSTTurkey warns Russia of “detrimental” consequences after another airspace violation
OLDER POSTLibya: Obama Resolved to Confront IS in Libya