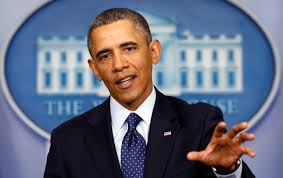 Libya: Obama Resolved to Confront IS in Libya

US President Barack Obama Thursday expressed his determination to tackle IS in Libya following Pentagon’s announcement of possible military action against the terrorist group in former Libyan ruler Gaddafi’s country.

President Obama convened his National Security Council to discuss with his security aids the Libyan issue which is taking a serious turn following recent gains of the Islamic group while the UN-backed unity government is up the creek and the intensification of Washington’s campaign to degrade and destroy ISIL.

“The President emphasized that the United States will continue to counter ISIL terrorist plotters in any country where it is necessary,” the White House said.

“The President directed his national security team to continue efforts to strengthen governance and support ongoing counterterrorism efforts in Libya and other countries where ISIL has sought to establish a presence.”

The President was briefed on ways the US and its partners in the Global Coalition to Counter ISIL continue to accelerate and integrate the military campaign and diplomatic efforts on all possible fronts, including working with international partners to counter ISIL’s stated goal of expansion beyond Iraq and Syria, the White house said.

The meeting was held after the Pentagon on Wednesday announced it was mulling military strategies for an intervention in Libya against IS.

Other reports announced earlier this week the setting up of an international coalition led by the US and supported by France and other European countries, with potential military actions against IS to take place in March.

IS’s recent gains including the attacks on Libyan main oil terminal and territory advances have raised eyebrows in the western camp which was reluctant to take military actions against the terrorist group that it is already fighting in Syria and Iraq.

Some official voices in Libya are wary about an international intervention at this time as they believe that it will further divide the country and set it on fire.