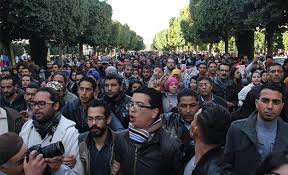 Tunisian Prime Minister Essid appearing before the Parliament for a hearing over the social situation prevailing in the country called on all segments of Tunisia to support the government in finding solutions to unemployment, main reason of social riots that shook the country over the past two weeks.

Habib Essid said that the issue of unemployment is a national concern, and that the responsibility to find solutions does not lie only with the government.”

Essid explained that even though people’s frustration is normal, the government does not have a wand to change the situation overnight adding that the situation was already chaotic when he took office as Prime Minister.

“We have tried, as far as possible, to improve the situation,” he said.

“We’ve started to find solutions. We don’t have solutions for everybody but we do have some solutions,” he added.

Prime Minister Essid’s comments were also echoed by his minister of employment Zied Laâdheri who told a local media Wednesday that the government cannot afford to employ all job seekers, as doing so will further plunge the government into jeopardy.

Laâdheri underlined the pivotal role the private sector could play to help get employment for all the youth and graduates on the dole, adding that the role of the government was to guide them.

Opposition lawmakers present at the parliament lambasted Prime Minister Essib whom they accused of incapacity and lack of vision.

“We do not want a government that sells illusions and inspires despair,” said Hassouna Nasfi, one former Nidaa Tounes member, now in the opposition.

Social riots in nearly all the regions of the country sparked over the past two weeks with thousands of youth taking to the streets to demand jobs.

Following the riots, President Caid Essebsi announced a nationwide curfew in an attempt to take control of the situation which also spiraled into lootings.

Unemployment rate has soared to 16 per cent presenting nearly 800,000 jobless people including around 300,000 youth graduates craving for jobs.

The country’s economy has badly fared last year with near zero growth recorded. The country’s vital tourism industry has been seriously battered by two major terrorist attacks which killed scores of people including 60 foreign tourists last year. Many tour operators have left the country leading to the closure of several hotels and loss of jobs.

North Africa Post's news desk is composed of journalists and editors, who are constantly working to provide new and accurate stories to NAP readers.
NEWER POSTLibya: US mulling over intervention strategy against IS
OLDER POSTIssue of Undocumented Moroccans in Germany to be Settled Soon