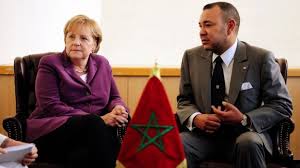 Issue of Undocumented Moroccans in Germany to be Settled Soon

Morocco and Germany are about to settle the issue of the nearly 3,000 undocumented Moroccan migrants, some of whom claiming refugee status on groundless basis.

The issue was discussed on Wednesday during a phone conversation between King Mohammed VI and German Chancellor Angela Merkel.

During their phone talk, the two leaders hailed the positive development of the two countries’ relations and expressed their shared resolve to endeavour to further expand their cooperation, a statement by the King’s Office said.

The statement said talks also covered the recent flow of illegal migrants, some of whom deceitfully claiming refugee status.

These flows followed what was meant to be a humanitarian move but whose goal was diverted and massively exploited by human trafficking networks, active on both shores of the Mediterranean Sea, the statement said.

In this context, the two leaders agreed that the German Minister of the Interior will visit Morocco the soonest possible to discuss with his Moroccan peer all aspects of this issue, examine the cases of the Moroccans illegally staying in Germany and repatriate them without delay.

Rabat and Berlin are bound by a repatriation agreement.

German media reported last week that Germany is readying to deport nearly 3,000 Moroccan and some 2,296 Algerian undocumented migrants to their countries of origin.

Hundreds of Maghrebans claimed to be from war-torn countries such as Syria, Iraq or Afghanistan to enter Europe during the wave of migration last summer, hoping to get the right to asylum.

Germany hardened its asylum procedures after the violence against women in several German cities on New Year’s Eve. On 19 identified suspects, 14 were either Moroccan or Algerian.