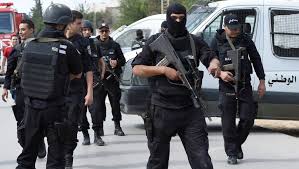 Around 3,000 law enforcement agents marched towards the presidential palace Carthage Monday to claim better work conditions and risk premiums while social riots across the country are still going on.

The protest has been in the pipeline since the November 2015 suicide attack in Tunis which killed 12 members of the presidential palace guard unit. Security forces in the wake of the attack lodged a set of professional demands calling for more protection.

The security forces protest comes as social riots across the country continue despite authorities’ attempts to ease the volatile situation prevailing in the country.

Several protests had been reported in a number of cities including Sidi Bouzid (city where the roadside vendor Mohamed Bouazizi set himself ablaze in 2010, igniting the 2011 revolution,) Siliana, Medenine, Kasserine, Gabes, Jendouba. However the degree of the protests has scaled down.

Prime Minister Habib Essid is expected to appear before the parliament Wednesday January 27 to explain the social unrest that engulfed the country nearly for two weeks now.

In a related report, the ministry interior relaxed the curfew from 10pm to 4am local time.

Authorities on January 22 imposed a curfew from 8pm to 5pm nationwide in an attempt to curb protests and lootings which threw the country nearly into abyss.

Tunisia hailed for its successful democratic transition has been embroiled in economic slow-down. The country recorded a near-zero GDP growth, unemployment rate is estimated at 16 per cent with around 300,000 youth in search for jobs, while the situation is more dramatic in underprivileged regions.