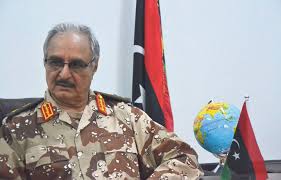 The UN-brokered peace plan proposing a unity government has hit another unexpected snag, dashing all hopes to restore peace and stability to this North African country.

MPs of the internationally recognized parliament, based in Tobruk, have rejected on Monday the proposed new government, demanding major changes.

Last December, UN announced the creation of a unity government, consisting of a nine-strong presidency led by a Tripoli politician, Fayez Sarraj, and for the moment based in neighboring Tunisia.

But the Tobruk MPs refused Serraj’s proposed 32-strong cabinet, demanding that it be reduced to 17 ministers. Controversial army commander, General Khalifa Haftar remains so far one of the main bones of contention between Libyans and a hurdle to unity government.

Haftar is seen by supporters as a bulwark against Islamist militants, while opponents in the Tripoli parliament demanded his removal as a condition for unity.

The rejection of the UN peace plan deals a hard blow to the United Nations which has been trying to persuade the elected Tobruk parliament and an Islamist-led rival in Tripoli to unite.

According to some analysts, it is a setback to international hopes that a government of national unity could be speedily installed and lead the fight against Isis, which controls 300km of the country’s Mediterranean coastline around the city of Sirte.

Libya has two governments and two parliaments — one in Tobruk and one in Tripoli — since the summer of 2014. Tripoli, in the west, is under the control of an Islamist-leaning government supported by an alliance of militias. The Tobruk authorities, which are recognized as the legitimate government by the international community, are allied to General Khalifa Haftar, who leads remnants of the Libyan army.

The two sides are fighting for control of territory and resources, and large parts of the country are under the control of heavily armed local militias. Sensing weakness of the country, Isis has stepped in and enhanced its influence and presence in the failed State, threatening the stability of the whole region.