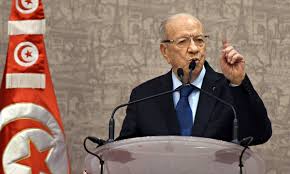 Amid the ongoing protests, Prime Minister Essid vowed at a press conference Saturday that Tunisia will continue to nurture and protect its young democracy “whatever the cost” while appealing for calm, national unity and complete security across the country.

Prime Minister Essid called on Tunisians not to follow people seeking to “destroy the democratic transition” through the protests adding that it is “the only example of success in the region.” He said the government acknowledges that despite the “huge political progress… there are lots of economic difficulties” and promised that the government will respond to “economic demands but we need a bit of time for that.”

Protests began last week after a job seeker in Kasserine was electrocuted to death. He had climbed an electric pole, threatening to kill himself to protest against his unemployment. The young men’s death triggered violent job protests across the country.

In a televised message, President Essebsi said the protests that have spread to other cities are targeting the country’s “stability and security” warning that “even Daesh in Libya wants to take advantage of this situation of violence.” He admitted that unemployment which is estimated at around 15% is the responsibility of the government. “I know that the state and the government are able to find the appropriate funds, even if we have to take them from somewhere else to allocate them to this issue” in order to face our responsibility, Essebsi stated.

On Friday, France announced a €1 billion support plan for Tunisia over the next five years mainly focused on helping “disadvantaged regions and youths, with an emphasis on employment.”

A policeman has been killed since the clashes began, but according to press reports, the situation was calm across most of the country after authorities imposed a nationwide nighttime curfew this weekend.

North Africa Post's news desk is composed of journalists and editors, who are constantly working to provide new and accurate stories to NAP readers.
NEWER POSTIsrael: Government supports settlements at any time, PM
OLDER POSTLibya: Foreign intervention in the perspective