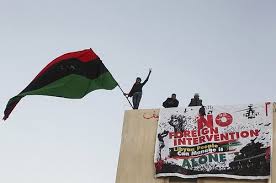 Libya: Foreign intervention in the perspective

Reports that foreign troops from Britain, Russia and the United States are already in Libya and would soon be joined by soldiers from France to support the Tobruk-based government have been vaguely refuted by the country’s army.

The Libyan army claimed that it is the only army that is supporting the unity government, stressing that “all eastern regions and all gates are protected from militant forces.”

A spokesman of the Tobruk government however admitted that they requested “a limited intervention” from the international community to “protect oil fields from Daesh attacks” following the recent assaults on a couple of oil infrastructures in the north.

Security sources claimed that around 500 foreign troops are already at the Jamal Abdulnasir military base, in southern Tobruk, on a reconnaissance mission and to support the government ahead of an offensive against the militants of the Islamic State.

France and the US have been supporting a military intervention in Libya and on Friday, Chairman Marine General Joseph Dunford of the US Joint Chiefs of Staff said the two countries will make sure their actions are “in conjunction with the new government” because “you want to take decisive military action to check Daesh’s expansion and at the same time you want to do it in such a way that’s supportive of a long-term political process.”

The New York Times quoted him saying “the president has made clear that we have the authority to use military force” because the Islamic state wants to use Libya as a “platform from which they can conduct malign activity across Africa.”

The Unity government that was established under the Libya Political Agreement must be approved by the Tobruk-based parliament before January 27 or else it will be null and void and can’t authorize foreign intervention.