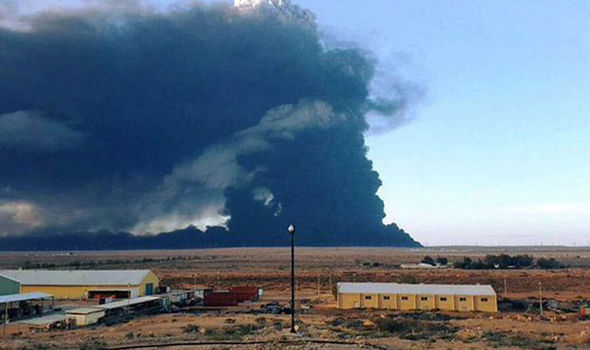 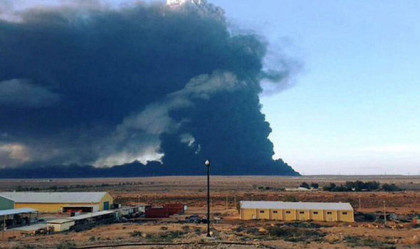 Libya’s oil sector suffered a major attack on Thursday as the Islamic State group destroyed oil storage tanks at Ras Lanuf port after its successive attacks to take over the port failed.

National Oil Corporation (NOC) stated that areas around the terminal are dealing with an “environmental catastrophe” with the fire services unable to access the area due to clashes. Libya’s oil output of around 1,6million barrels per day in 2011 has fallen to less than 400,000 due to attacks of oil ports, protests, sieges and destruction of storage facilities.

The Islamic State claimed responsibility for the attack on Ras Lanuf and threatened to target other ports. In a video posted on Islamic State’s official Telegram channel, a militant of the group claiming to be Abu Abdelrahman al-Liby stated that “today Es Sider port and Ras Lanuf and tomorrow the port of Brega and after the ports of Tobruk, Es Serir, Jallo, and al-Kufra.”

NOC Chairman Mustafa Sanalla said the damage caused by the recent attacks means that Ras Lanuf would be out of service for a “long time” as the extent of damage is yet to be fully determined.

Two weeks ago, clashes between the Islamic State and the Petroleum Facilities Guards controlling the area around Es Sider and Ras Lanuf left seven oil storage tanks damaged by fire.

NOC is blaming the Petroleum Facilities Guards for the damage caused by the attack because of their “intransigence” in blocking a shipment. The guards are led by Ibrahim Jadhran, an alleged federalist supporting the Tobruk-based government. He also controls export terminals at Sidra, Brega, and Zuetina.

Oil is Libya’s main source of revenue and its loss will affect the activities of the authorities.