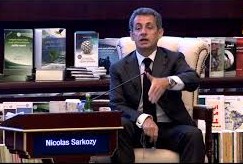 Although the Algerian government has not yet reacted officially, a top diplomat at Algerian Foreign Affairs ministry has termed Sarkozy’s statements as a provocation and upsetting.

Speaking at an international conference in Abu Dhabi (United Arab Emirates,) the ex-French Head of State deplored Algerian intransigence and refusal to reopen its land borders with Morocco, saying that borders have been closed for many years now, affecting the region’s annual economic growth.

This situation undermines the Maghreb Union and its common market project, dashing the hopes and dreams of the Maghreb people for unity, said the Former French president, head of the UMP party. He recalled that the borders between the two countries remain shut due to the Western Sahara issue.

Sarkozy has also voiced his utter rejection of the idea of creating a new entity in Western Sahara, affirming that France has always supported Morocco’s sovereignty over its southern provinces.

“France has always supported the Moroccan sovereignty over the Western Sahara”, said Chief of the French Republicans party, recalling his first visit to Laayoune in Southern Morocco, in 1991.

“It would be difficult to convince me of the need for a Sahrawi republic in this region of the world threatened by terrorism”, he said, stressing the danger of terrorism and insecurity spawning in the Sahel region.

Moroccans are lucky and should be proud of having King Mohammed VI as their Sovereign. The Moroccan monarch has ushered in major constitutional reforms at a time Arab countries were rocked by popular social uprisings that led to the collapse of many Arab regimes, Sarkozy said.

Morocco has launched landmark and bold political and constitutional reforms which enhanced the Kingdom’s peace and stability, added the former French president.

These reforms have enabled the North African country to emerge as a model in the region and haven of peace, gaining trust of investors worldwide.