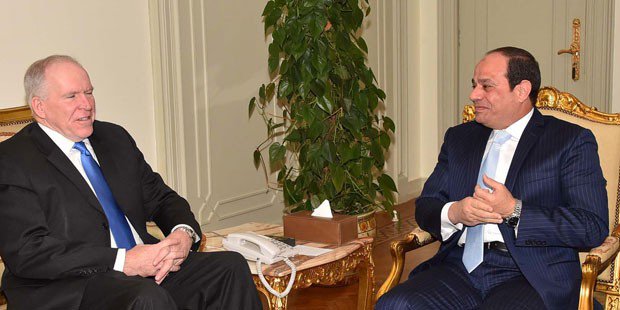 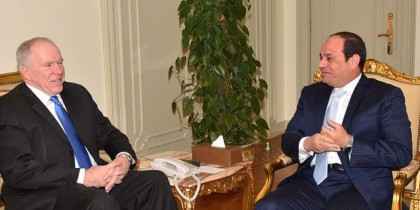 Egyptian President Fatah al-Sissi Sunday urged the United States to expand its cooperation with Egypt beyond security and counter-terrorism.

At a meeting with CIA boss John Brennan, the Egyptian President called on Washington to diversify its ties with his country and expand cooperation to social, cultural and intellectual realms.

Egypt and the U.S. have strong military cooperation and Cairo has backed the U.S.-led international coalition against IS in Iraq and Syria though it is not militarily engaged.

John Brennan who arrived in Cairo on Saturday told reporters following the meeting that Egypt is a strategic and key ally and that he was in Cairo to get informed on Egypt’s vision of regional issues, including counterterrorism approaches.

According to a presidential statement, President al-Sissi told his interlocutor that one per cent of the Sinai Peninsula area is affected by terrorism activities.

Egyptian security forces have been embroiled in repeated attacks by IS-affiliated militants in the Sinai since 2013 following the ouster of Egyptian Islamist President Mohamed Morsi. Last week, two attacks claimed by IS targeted foreign tourists and a resort hotel in Cairo and in Hurghada.

The militants in October last year claimed the downing of a Russian passenger jet carrying 224 people and Western experts’ findings concluded that the crash was an act of terrorism.

However Egyptian authorities rejected the claims saying that their own investigation did not reach the same findings.