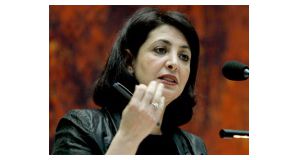 A Native Moroccan at the Helm of Dutch Parliament

A Moroccan native Khadija Arib became Wednesday Speaker of the Dutch Parliament after she was elected by 83 MPs out of the 134 qualified to vote.

The election of a speaker of Moroccan origin is seen as a little dig at populist and anti-Islam deputy Geert Wilders who did not miss the opportunity to criticize her election saying that it was “a dark day in the history of the Dutch Parliament.”

Wilders, known for his anti-migrant stands, criticizes Arib for her dual Dutch and Moroccan nationality.

Arib is a politician of the labor party and has been sitting in Parliament since 1998. Before her successful election, Arib has been in the seat of the Speaker of the Parliament as care-taker since December 2015 after Speaker Anouchka van Miltenburg stepped down following a scandal.

Khadija Arib, born in Morocco in 1960, migrated to the Netherlands when she was a teenager.

Khadija Arib is not however the only public figure of Moroccan origin in the Netherlands. Her countryman, Ahmed Aboutaleb, is the mayor of Rotterdam, the second largest Dutch city.

Ahmed Aboutaleb, born in 1961, is also member of the Labor Party. He has been the Mayor of Rotterdam since January 5, 2009. He served as State Secretary for Social Affairs and Employment from February 22, 2007, until December 12, 2008, in the Cabinet Balkenende IV.

He is the first mayor of a large city in the Netherlands who is of both immigrant descent and Muslim faith.

Khadija Arib’s election and Ahmed Aboutaleb’s position mitigate the idea that racism and xenophobia are on the rise in the Netherlands, an idea embodied by Geert Wilders, leader of a small nationalist party, known for its hostility to immigrants.

North Africa Post's news desk is composed of journalists and editors, who are constantly working to provide new and accurate stories to NAP readers.
NEWER POSTMauritania: President Ould Abdel Aziz promises to quit power in 2019
OLDER POSTQatar-US: Aljazeera America to wind down due to financial reasons