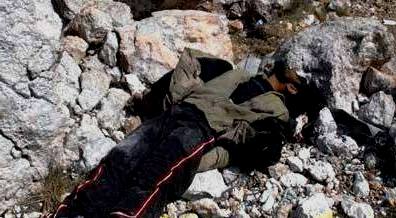 Tunisia: A terrorist killed in ambush, Ministry of interior

Tunisian Interior Ministry announced Sunday security forces in conjunction with anti-terrorist unit traded fire with a group of terrorists on mountains of Siliana, killing one of them, official says.
Interior Ministry’s spokesperson Walid Louguini told a local radio station that security forces together with an anti-terrorism unit from the district of Aouina laid an ambush to a group of terrorists in the mountains of Siliana, killing of one them.
The official also told media that early investigations indicate that terrorist killed was a foreign adding security forces also seized an arsenal including a Kalashnikov, a grenade and a bomb device.
It is also reported that security forces were alerted by a man who said the group bought some equipment from intended to dig holes. He reportedly added that they also asked him to do some shopping for them.
Tunisian security forces have been busy fighting terrorist groups perpetrating repeated terrorist attacks. According to the Interior Ministry last year more than 15 terrorist attacks had been foiled in month of December. Also in November, a suicide bomber killed 12 members of the Tunisian presidential special unit in the capital Tunis, not far from the Interior Ministry.
Tunisia according to a latest report from the US State Department on security situation around the world in 2016, Tunisia will live a troubled 2016 to be marred by social and political unrest.