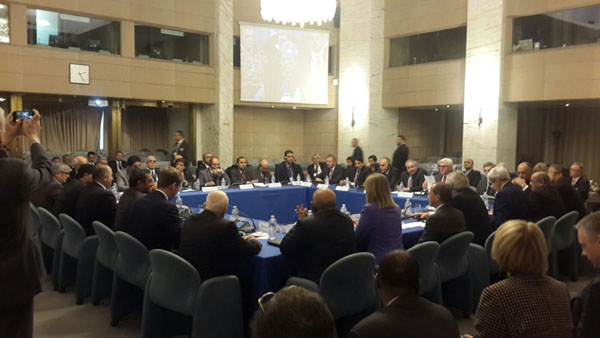 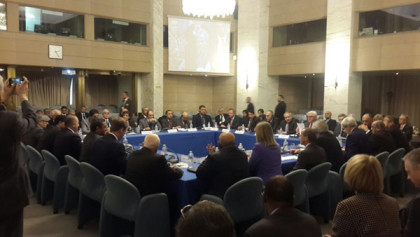 17 countries including UN Security Council, EU, African Union, Arab League Sunday in Rome pledged full support to the UN-proposed Libyan Government of National Accord (GNA) and urged Libya political sides to anoint the National Dialogue Agreement on Wednesday as they indicated themselves last week in Tunis.
“We fully recognize and support the Libya Political Agreement and the institutions validated by it, and pledge our support for a Government of National Accord as the sole legitimate government of Libya. We will cease official contacts with individuals claiming to be part of institutions which are not validated by the Libya Political Agreement. We stand by Libya’s national economic institutions, including the Central Bank of Libya (CBL), National Oil Company (NOC), and the Libyan Investment Authority (LIA), which must function under the stewardship of a Government of National Accord, charged with preserving and protecting Libya’s resources for the sole benefit of its people,” the group said in the final communique.
For them the GNA is essential to address all the challenges including economic, humanitarian, security and most threatening issue related to IS tormenting the country.
Leading the press conference at the end of the conference, US’s John Kerry and Italian Foreign Minister Paolo Gentiloni indicated that the GNA will be established in Tripoli and a security plan designed by the UN will ensure security guarantee for the institution to operate freely.
The 17 country-attendees also threaten stop official contact with all other non-authorized institutions under the National Dialogue Agreement and warned “spoilers” of sanctions adding that they will be held accountable.
They also commended Tunis’s last week consultations between rival Libyan factions urging the Libyan delegates present in Rome to head on with signing of the UN-broken Dialogue Agreement on Wednesday, December 16, in Morocco.
As the international community meets in Rome to lay down the path to towards the formation of the unity government and signing of the Dialogue Agreement, International Crisis Group (ICG), Saturday warned that pressing protagonists to endorse the agreement without addressing security and humanitarian concerns may lead to stillborn unity government.
For the international NGO, ending prematurely negotiations will strengthen hardliners as well as “granting recognition to a government that has insufficient backing will condemn it to irrelevance.”
ICG advised that more time should be allocated to iron out all pressing concerns and solve security and humanitarian problems before heading towards formation of the unity government.
“A Government of National Accord is likely to be stillborn if prematurely recognized. It will not be able to be seated in Tripoli due to security concerns and might trigger renewed fighting for control of the capital,” it added.
It also suggested the UN security plan for Tripoli should be expanded to the rest of the country and include in the security dialogue militias from the Jebel Nafusa, Misrata, Tripoli and Zintan in the west, Libyan National Army, Benghazi Revolutionaries’ Shoura Council and the Petroleum Facilities Guard in the east and Tebu, Tuareg and Arab groups in the south.