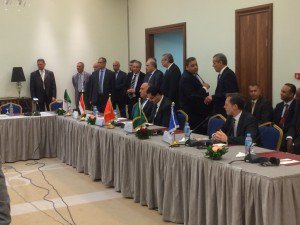 Libya’s neighbors and regional blocs Tuesday expressed concern over the ongoing fighting wrecking the dialogue process in the North African oil-rich country, pointing out that only Libyans themselves can solve their own problems, therefore rejecting foreign intervention.

Egypt, Tunisia, Chad, Niger, Libya, Sudan, Algeria, the African Union, the EU, the UN, and the Arab League met in the Algerian capital for the sixth time to discuss the security situation in war-torn Libya which has festered throwing the stability of the region into disarray.

The delegates deplored the ongoing fighting which harms relationship between rival factions, and expressed their worries to see Libya becoming a backyard for terrorism and all sorts of criminal activities.

The Libyans themselves are aware of the situation and are calling on neighbors and friends to support Libyan weak institutions and army to overcome terrorist organizations and bedfellows roaming about unthreatened.

“We feel sorry that Libya has become a country of transit for organized crime, illegal migration and illegal arm trafficking,” said Mohamed al-Dairy, Minister of Foreign Affairs of the internationally recognized Libyan government based in Tobruk. “Support should be granted to our army and police in order to be able to fight terrorism,” al-Dairy added.

All participants underlined the need to find a solution to the political crisis in Libya which cannot control its borders, while rejecting any military intervention in the country, any repartition of the Libyan territory, or any interference in the peace process.

They underlined that a lack of consensual agreement to end the political chaos in Libya will only benefit terrorists and that the responsibility to end the conflict rests primarily with the Libyans.

Libya has been tormented by rival fighting and dispute over power. Since the fall and death of former ironman Gaddafi the country has been split between two opposed governments based in Beida and Tripoli. UN efforts to broker a deal have reached a deadlock after the rival parliaments namely Tobruk-based House of Representatives (HoR) recognized by the international community and Tripoli-based General National Congress rejected the UN settlement roadmap.