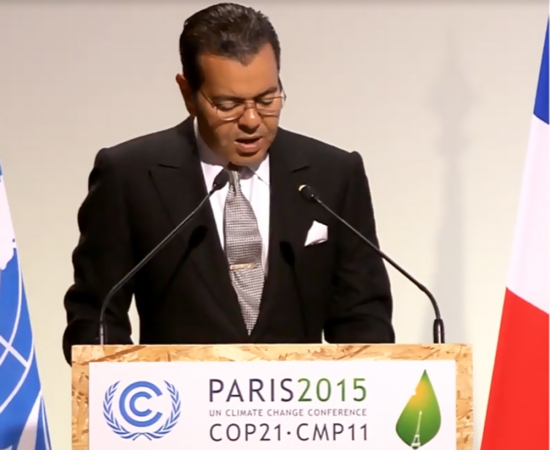 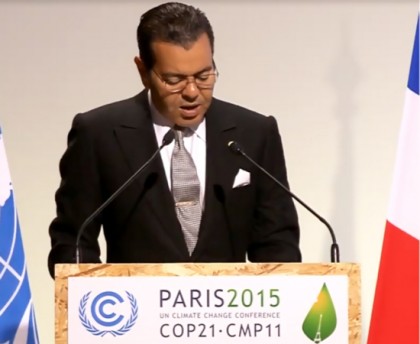 Morocco’s King Mohammed VI has stressed the need to reach international consensus and to use technological advances effectively to reduce the impact of global warming, while he called for supporting developing countries in their endeavor to fully embrace the Climate Action agenda.

“A genuine, inclusive international consensus is imperative. It requires that we support developing countries in their endeavor to fully embrace the Climate Action agenda,” said King Mohammed VI in an address before the United Nations conference on climate changes (COP21) that opened Monday in Paris.
“The Paris conference gives us the opportunity to consolidate a comprehensive, operational, balanced, universal legal instrument that will make it possible to keep global warming below two degrees Celsius and move towards a low-carbon economy,” the Moroccan sovereign said in the address that was read out on his behalf by his brother Prince Moulay Rachid.

King Mohammed VI is still suffering from voice extinction following the influenza he contracted earlier November.
Pleading for developing countries and more especially for Africa that he described as “the continent of the future,” which “deserves special attention,” the sovereign said that the climate change predicament is the ultimate injustice suffered by the most vulnerable.

“The consequences of climate change are affecting developing nations as much as – if not more than – developed countries, especially the least advanced African and Latin American States and small island States,” he said, stressing the need to make sure the populations of these countries enjoy decent living conditions.
“In this context promoting the transfer of technology and raising funds, particularly for the benefit of developing countries, is fundamental,” he went on to say, warning against compelling these countries to choose between economic development and the protection of the environment.
“Developing countries’ commitment to combat the effects of climate change must also take into account their respective development models as well as their inhabitants’ customs,” King Mohammed VI insisted.

In his address, he also surveyed the efforts made by his country to struggle against climate change, pointing out that “Morocco’s ambitious, substantial ‘Intended, Nationally Determined Contribution’ under the United Nations Framework Convention on Climate Change confirms the Kingdom’s avant-garde approach.
More than 150 heads of state and government are taking part in this conference to reach an agreement that is balanced, ambitious and binding in order to ensure a better future for the planet.

The main objective of this universal conference is to have states to agree on a new international climate agreement, applicable to all countries to keep global warming below 2° C.