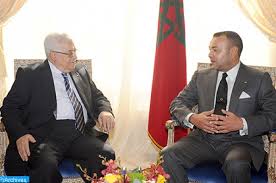 King Mohammed VI has renewed Morocco’s “unconditional and constant support for the historical and legitimate rights of the Palestinian people, particularly the right to establish their independent State on their liberated territories, with East Al Quds as its capital”.

In his message the Moroccan Sovereign voiced the North African country’s backing to “a viable, sustainable Palestinian State living side by side with Israel in peace and security and in accordance with the resolutions upholding international legitimacy.”

He also deplored “the absence of any tangible progress in resolving the Palestinian issue, twenty-four years into the Israeli-Palestinian peace talks”, noting that the situation on the ground “is getting worse as a result of Israel’s continued, invariable policy of aggression towards the steadfast Palestinian people, in blatant violation of international law and of the provisions of international humanitarian law.”

Israel seeks “to undermine international efforts to revive the peace process and put the final nail in the coffin of the two-State solution advocated by the international community to achieve just, comprehensive and sustainable peace in the region”, said King Mohammed VI, who chairs Al Quds (Jerusalem) Committee of the Organization of Islamic Cooperation (OIC.)

Indeed, Tel Aviv has continued its settlement and judaization policy. It has also imposed a blockade on the Gaza Strip, repeatedly violated the sanctity of the Al-Aqsa Mosque, allowing radical Jewish groups to attack worshippers inside Al Haram al-Sharif, under the protection of the Israeli forces.

“These violations have been compounded by the terrorist crimes perpetrated by Israeli extremists against Palestinian citizens. Such acts sometimes amount to crimes against humanity,” said the Moroccan sovereign.

The King who renewed his conviction that “negotiations are the only way to achieve a just, lasting peace in the Middle East region” urged the international community “to revive the peace process through sincere, serious negotiations, with a clear timetable and on the basis of the principles of international law and related UN resolutions.”

“Morocco is ready to be actively engaged in any initiative aimed at moving forward with the peace process in order to achieve a settlement that would make peace and stability prevail in the region”, stressed King Mohammed VI.