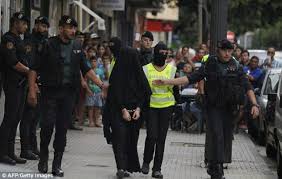 Moroccan security services have captured lately three people belonging to a militant cell having ties with the terrorist Islamic State group. The cell, which includes a woman who appears to be the first female suicide bomber, is the second of its kind to be dismantled in the North African country after the Paris attacks of November 13th.

According to Moroccan Home Department, the three members of this group were active in the cities of Fez and Casablanca (central Morocco) and the southern town of Oulad Taima.

They were apparently planning to take hostages and launch attacks targeting security agents. They have all pledged allegiance to ISIS and had an apparent hatred for Morocco, its kingdom and its symbols.

The dismantling of this cell comes days after terror attack on a bus in Tunis, killing 12 people. Moroccan security and intelligence services have helped French police locate and identify the mastermind of the Paris barbaric attacks, disrupting other terror plots in Europe.

This proved the key role Morocco plays in the fight against terrorism, earning the North African Kingdom worldwide praise and recognition.

Moroccan intelligence services broke-up 140 terrorist cells since 2002. During the same period, 276 terrorist plots were foiled and 2,720 suspected terrorists were arrested.

A recent study published by Spain’s Real Instituto Elcano showed that the number of terrorist attacks in the Maghreb soared between 2011 and 2014, except for Morocco which was hit by only one terrorist attack during this period.

Since the Marrakech bombing of 2011 targeting tourism, the Moroccan security and intelligences have doubled vigilance and deployed a comprehensive counter-terrorism strategy that helped keep the country safe.